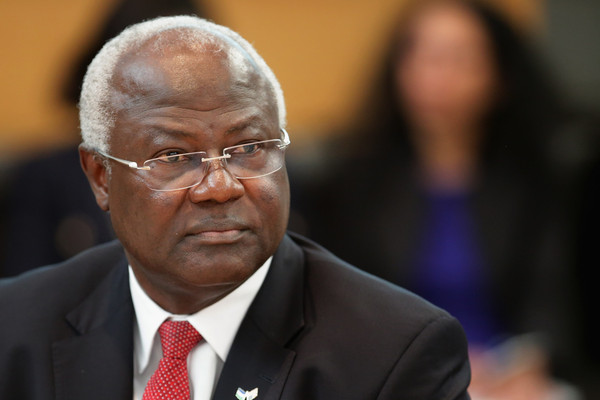 Say what you may about outgoing President Ernest Bai Koroma (EBK) (in photo) and his style of governance; one thing I will not accept, is the notion that he does not play the long game and what is known by Salone folks as Pass Ar Die politics, with a few well-studied pages from the Siaka Stevens playbook. There is no gainsaying that the 1991 constitution, global trends and the populace would have stoutly rejected an outright third term bid by EBK. Therefore, in his typical crafty, long game fashion, he has positioned himself for a third term, in all but name. Let me try to explain.

The most powerful man, as far as APC is concerned, now and way after March 7,th (maybe, until his death) is EBK. Running a very distant second is the APC’s Secretary General Osman Yansanneh. I don’t recall either character during the electioneering in the run up to the 1996 elections. Meet Victor Foh. I remember this: As one of the point men (was he not the scribe-or-so?) for the All Political Parties Association (APPA), he walked into a restaurant (Mrs Quee’s spot above the SLRTC bus station) at which I was lunching, after he had just been manhandled by some security personnel. Foh had on one of those APC pins fastened to the pocket of his Safari suit. He was blipping resolute about resistance to junta rule. So much so, one could see the swollen-toad-like puff on his neck, complete with bellicose veins sprouting thereof. Then, Foh and Lawyers Serry-Kamal and Eddie Turay literally carried the APC on their shoulders. Foh emerged as Secretary General, while Eddie Turay led the party as it went to the polls in the 1996 elections, netting 5.4% of total votes cast and affording the former a seat in parliament. This was a serious feat at the time, considering we are talking here about the same APC, the NPRC junta had some four years previously overthrown, folks! There are two, perhaps three things, one cannot get twisted about Foh: 1) His dexterous grasp of our constitution and legal instruments, generally, without a law degree. 2) His unblemished loyalty to the APC, and finally, loyalty to EBK since he ‘emerged’ as leader in the run up to 2002 elections. We (Foh and I) crossed paths, severally, during the 2002 elections…from him introducing EBK at Fourah Bay College, to his holding forth at APC’s offices by Mattru Road, Bo, when I visited as part of the BBC team covering the elections.

Why fixate on Ambassador Foh? Why not talk about the late Serry-Kamal, Esq. or Ambassador Eddie Turay. Any beef with Mr. Foh? Not exactly. But that is not even the/an issue. As my last article on KKY indicated, EBK has at least flirted with one (PDP-Sorbeh) or two (MFC) political outfits at leadership/membership level. At the time the Stop!Press Restaurant/Democrat Press vortex was the hub for frenetic political activity, Foh was a regular; never as anything, but blue-blooded APC! About ambassadors! What about them? That’s simply one old leaf in the Siaka Stevens playbook, to uproot and disconnect the grassroot appeal or the on-the-ground-ness of certain powerful politicians—ones that are or could prove unmanageable. I don’t intend to bowdlerize the dignity in such high offices of national service. However, why is it that all the people who were kingmakers (inside and outside the pre-EBK APC), or prospective obstacles to the creation of EBK ALMIGHTY, were posted abroad as ambassadors? It is by now redundant to mention all the gleeful social media memes capturing a Foh that had been S.I. Koroma’d. It was eerily similar/telling to see actualities of Foh using words that are almost exactly what legend has it that Koroma had said of his loyalty to Stevens. One among the two, was a kingmaker and enforcer who enabled the other to turn into a god, no? History when ignored teaches us nothing about the present, seriously!

How do we cut to the present, readers, to what I have framed as EBK ALMIGHTY. Early last year, (after well-calibrated touts of third term proponents, testing the waters with the “After U, nar you back” folk chant), precisely, March 24th, a group called APC National Youth League after a confab titled “Inclusion of Young People in Governance…A Promise Fulfilled,” declared EBK Chairman and Leader for life—a designation that has no edict or precedence in the APC’s history. The new APC! These were, largely, the yuppies in the party who had little or no sense of the “struggles” that, EBK, (a Johnny-come-lately?) had to endure, even if a teeny-weeny bit, to capture its leadership. Talking about those wee-wee hours at another legal mind, Terrence Terry’s, office at Charlotte Street, as EBK jostled his way pass the likes of Ambassador Turay for that top spot. In June, the erstwhile most powerful organ in the party, the National Advisory Committee (NAC), was left carrying the can: they tabled resolutions that had such language as “election or selection” of a flagbearer, who will in turn “select” a running mate, which they had the charge to rubber stamp. EBK ALMIGHTY was not born, or coronated (we are way passed those epochs) then, he was given his penultimate, Pass Ar Die, superpowers. Good for APC and their lot. ‘The Ambassadors’ and their ilk now suck it up to a termed-out president, keeping stranglehold on their party. Should they win come March 7,th or sometime thenceforth, it will be his third term in all but name; the summit of the long game.

For the preceding blabbing of mine to be worth its salt or taken to the bank, there is the huge proviso: If the APC wins. And that’s a very big “IF.” No party, APC included, according to both local and international forecast can win the elections in the first round. Among the 17 flagbearer candidates in the past SELECTION process, there are some responsible for the extravagant concentration of power in the hands of EBK. And it would not be just conjecture now, would it, to think that that bulwark of one voice, Tolongbo, which succeeded the APC convention and its outcome, belies cracks and fissures lurking around its corners? As I stated in the KKY piece I did recently (google it: “Third Force Blues: A Word for KKY”), I may have been privy to some happenings that were nothing short of a “coronating ethos.” The way certain members of his, yes, it’s got to be that, ‘retinue,’ advanced his candidature and eventual leadership of the APC, is nothing short of worshipful. Essentially, the making of some Alpha and Omega, real time! There are huge swaths of EBK’s long game terrain that I cannot cover herein. We have all seen the dual citizenship card dropped and all the furor it stirred. One wonders what other ace(s) could be up EBK’s sleeves as the countdown becomes frantic in the coming days, and desperation looms. If March 7th comes and goes, and the Third-Term-by-Proxy dream turns into a mere delusion, it would not be because EBK did not do his homework. Rather, it would be the electorate of the country giving the middle finger to the scheme—just like they repulsed its blatant iteration; “After u, nar u.” More like: “After u, go blow, goodnight.”