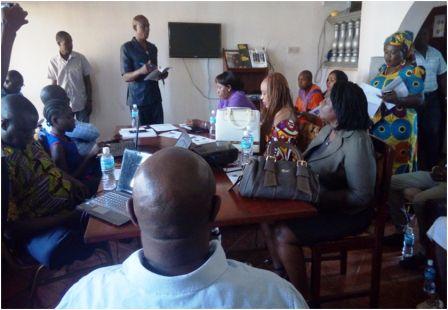 The Initiative in Capacity Building Association International (ICBAI)/Save Dignity of Women and Children in Sierra Leone has encouraged other organizations and institutions to work in collaboration so that they can achieve the same goal to improve lives of vulnerable women and children.

The Founder of ICBAI/SaDWaC SL, Mrs. Isata Musu Harding made the call at a meeting organized at Amnesty International Headquarters, 145 Circular Road in Freetown on Thursday 11th January 2018.

Mrs. Harding reiterated that the purpose of the meeting was to network with other institutions because since the inception of the organization in 2006, they have received no external sponsorship or aid adding that they depend on personal donations from colleagues and few institutions in the country.

She emphasized the passion they have as an organization to promote the rights and dignity of women and children and mentioned that they also capacitate boys and the physically challenged to feel inclusive in society.

She encouraged colleague women who she described as result oriented not to make themselves vulnerable but come out and take part in decision making.

She said over the years they have been partnering with the Rokel Commercial Bank, Ecobank, Amnesty International and the Sierra Leone Ports Authority among others.

She disclosed to participants that they will be holding a Valentine Spelling Bee on February 14th this year for pupils in nursery, primary and secondary schools.

She therefore urged interested members from the public to register and be part of the Valentine Spelling Bee Competition to grab winning and consolation prizes. In her presentation, the Training Manager, Rokel Commercial Bank, Mrs. Davies thanked ICBAI for such a wonderful initiative and submitted that she would make her personal contribution because she believed in the empowerment of women. She added that when women are empowered, the nation is also empowered pointing out that   women are special species because they are created with dignity.

The Training Manager spoke on how women have been sexually abused by men and admonished women not to allow men to seduce them because they are the comfort of creation.

She frowned on men that treat women with disregard and debunked that women are not liability to men.

Mr. Abdulai Y. Bangura from the Human Right Commission of Sierra Leone said their mandate is to protect and promote human rights for all and mentioned that women protection is paramount in their work.

“Every human being is equal to one another”, said the Commissioner and pointed out that they have done so much in ensuring women dignity is protected and respected and to be part of decision making and concluded that they are happy working with ICBAI to increase the voices of women.

Speaking on behalf of the 50/50 Group Sierra Leone, the Public Relations Officer, Madam Zainab Clarkson Tunkara said they wanted to see more women in politics and governance and stated that in any crisis women and children are the most vulnerable group.

She said Sierra Leone is a male dominated country where the rate of sexual offenses is higher adding that the 50/50 Group addresses gender inequality and domestic violence. “We have a voice to promote the common course which is to lift barrier against women”, said the PRO and furthered that women dignity is the nation’s dignity.

Representing the Sierra Leone Police (SLP), Deputy Head of Family Support Unit (FSU), Mrs. Fatmata Daboh said Sexual Gender Base Violence (SGBV) is an issue of great concern that needs urgent attention and disclosed that teens and teenager should be given comprehensive education on sex.

She called on Government, FSU and parents to work in collaboration to protect our women and children and encouraged parents to teach their children on the bad consequences of teenage or early pregnancy and described sex as not a taboo.

According to Mrs. Daboh, they have prioritized the issue of teenage pregnancy through community outreach and concluded that FSU would uphold its mandate for girls and women’s rights to be protected and respected.