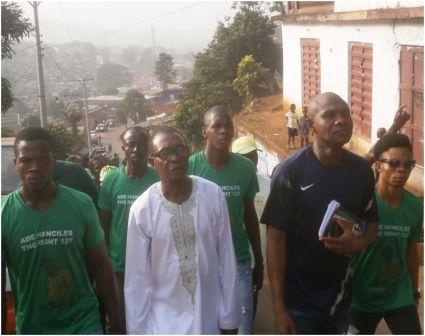 One of the popular politicians in the main opposition, Sierra Leone Peoples Party (SLPP), Rev. Victor Ade Hanciles on Sunday, 10th December, 2017 brought together thousands of supporters at the Dwozark Community Field in Freetown.

Speaking to supporters of the SLPP, the Man of God, commonly known as Papa Ade maintained that the large turnout of the green family to the meeting was a clear manifestation that he is a resourceful man of the people and emphasized that SLPP members need political tolerance to win the March 7th 2018 multi-tier elections.

“We are going to build a new strategy for political affiliation so that we can easily win the elections in the first round of the ballot”, said the hopeful Member of Parliament, while expressing confidence that he is going to win the contest because he has the support of youths from various political parties including the All Peoples Congress (APC).

He pointed out that political transformation can only be possible if members of the ruling party join the SLPP.

He cautioned the Dwozark community people to not allow other political parties to fool them because as far as he is concerned the SLPP is the only way out.

He stressed that the youths are suffering because they do not have jobs, food, and opportunities to better their situations.

He therefore appealed to supporters to vote for Mr. Julius Maada Bio as president and Parliamentarian candidates and Councilors so that the SLPP will gain more grounds.

On his part, the SLPP aspirant for the Freetown Mayoral ship, Raymond De Souza George commonly known as Papa Ray, described himself as not a politician but joined the race in order to correct what is disturbing the people.

He opined that the country can only change or develop if we have God fearing representatives who are ready and willing to hate what God forbids.

“Let us depend to God because He is our provider and truth is the only thing that shall set us free,” he warned. He admonished the young people that we can only develop as a nation if we embrace peace and love one another as God loves us. He deliberated that if he becomes Mayor, he will make Freetown an ideal place to live because he will tell the people truth and never lie to them.

An aspiring Councilor, Mrs. Lahai Gibao, said he is contesting to bring sanity and discipline at Somalia Town community, adding that as a teacher, if he is given the opportunity, he will instill discipline in the said community.

Mrs. Goba from Sorie Town Women’s Development Organization intimated that SLPP is the only caring party as far as human resource development is concerned while Mr. Hassan Stevens aka Sam King of Ward 435 appealed to the general membership of the party to support his aspiration.

Another intending aspirant, Mr. Soloku described Rev. Ade Hanciles as a son of the soil who knows all their problems and maintained that they are ready to rally behind the philanthropic politician because he knows their problems which he has demonstrated by the good works he is doing in the community. He vowed that they will remove the APC from power on 7 March, 2018.

The Chief Executive Officer, Desperate Movement, Mr. Edward M. Jabbati, said they are united in the SLPP without bad heart or backbiting as they are preparing to take Maada Bio back to State House. He said they are ready to support any SLPP candidate who may be fortunate to be given the party symbol.

Mr. Olima Allen who represented the Green Light Movement in the SLPP said the organization is registered and well established within the party and told the gathering that they are open up to all aspirants.