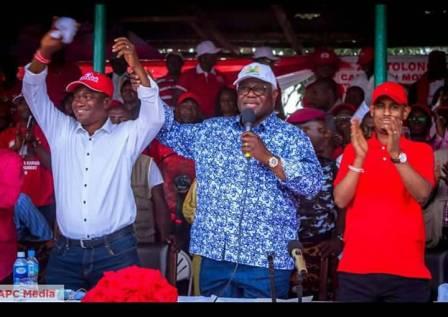 President Ernest Bai Koroma and members of his entourage have completed a partial tour of the Northern Province to thank the people for their unwavering support of the ruling All People’s Congress Party (APC) and to formally introduce Dr. Mathew Wilson Samura Kamara as the presidential aspirant for the APC party with lawyer Chernor Marju Bah as running mate.

Starting from Port Loko to Kambia and rounding up in Makeni including several smaller towns along the way, we saw a red sea of supporters marching like an invading army! The chorus “tolongbo” echoed through the airwaves as the army of red supporters marched from one point to the other.

The thank you tour, according sources, will continue throughout the country for the rest the month.