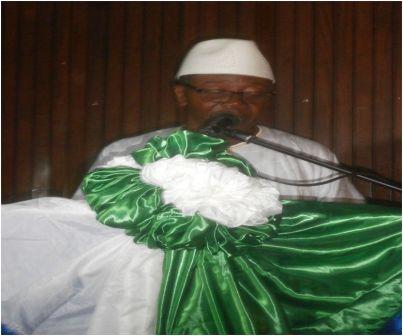 The commissioner for the Northern Region of the National Electoral Commission (NEC), Mr. Macsood Gibril Sesay, has informed the general public that they are not going to disenfranchise any eligible Sierra Leonean whose name is on the Voter’s List on the polling day, even with or without an identity card.  (Photo: Northern Region Commissioner for NEC, Macsood Gibril Sesay)

He made the pronouncement during the Maulid Nabi commemoration which marks the birthday of Prophet Mohammad which, he supported in collaboration with the Iranian Cultural Center and Computer Institute together with the Ahmadiyya Muslim Mission in Sierra Leone, the Sierra Leone Muslim Congress among others at the Miatta Conference Centre in Freetown recently.

He informed the audience that he has a good message from the NEC Boss, Alhaji Mohamed N’fa Alie Conteh that the Commission will encourage registered voters to vote on poling day, even if he/she does not have the Voter Identity Card but his or her name is on the Voters’ Register.

He also stated that the Commission will ensure that they work under the direction of the laws of Sierra Leone in accordance with their 2012 electoral laws, noting that they are working very hard to improve on their responsiveness and preparedness ahead of 7 March, 2018.

He admitted that they are facing a lot of difficulties in terms of funding and also with the issue of missing data which, he said they have addressed, adding that missing data or any other error will be amended accordingly.

He pointed out that their primary mandate is to conduct general elections, including Head Man, Paramount Chieftaincy and General elections without favor or bias for any political party or individual.

The Commissioner appealed to citizens to go out massively to collect their voter identity cards, noting that all political party aspirants should advice their supporters to tolerant each other as God permit us to do during national engagement.

He said they are very committed to conduct free, fair and credible election at all time and caution young people to observed basic rules during Election Day adding that everybody is entitle to a single vote which he identified as your right and your life.

He said, it is against the law for a person to campaign on poling day and mention the commitment they have had with other concerned Electoral Management Body (EMBs) like the Sierra Leone Police (SLP), Republic of Sierra Leone Army Force (RSLAF), Office of National Security ONS to maintain law and order in 2018 general election.