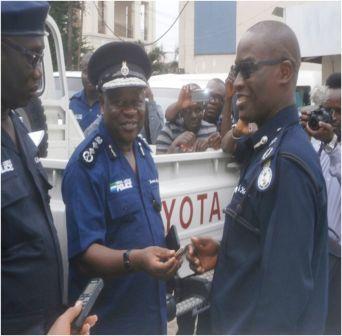 The inspector General of Police (IGP), Francis Alieu Munu has commissioned 18 vehicles to security officials including Regional Commanders at the Police Headquarters in Freetown last Wednesday for effective election policing.

Receiving the keys, AIG Memuna Konteh Jalloh expressed thankfulness for receiving such goodies from the IG and disclosed that it has been trying times for them to Police their various regions as a result of inadequacies. She described the ceremony as a special moment because the vehicles will boost their moral integrity. Director of Operations, Alsheikh Kamara assured IG Munu that the vehicles are going to be used for it intended purpose while the Director of support Services in the Sierra Leone Police, AIG Kalia Sesay said the vehicles were allocated to Regional Commanders both at the provinces and in Freetown adding that they have received eighteen out of thirty five vehicles and expressed anticipation that they will soon receive the remaining vehicles.

Â He said the procurement of the said vehicles is part of their three key deliverables with the Ministry of Finance and Economic Development (MOFED). According to him, there is a transport unit to help regularize the servicing of the vehicles to live in their economic lives and bragged that the Said department has all equipment to keep the vehicles up and running.

The Wealth Which Enslaves Its Owne...