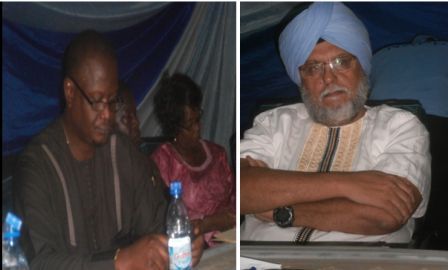 Deputy Commissioner, Anti-Corruption Commission (ACC), Shollay Davies expressed thanks and appreciation to the National Association of Procurement Professionals (NAPP) which he described as a new baby. He said according to a World Bank report posted recently about 20% of Government expenditure lost as a result of miss procurement which occurred because of corruption and other forms of malpractices.

The Deputy Commissioner highlighted the following as corruption related including substandard work, poor quality of goods supply, procurement of undesired stock, inflated cost due to kickbacks and moonlighting. He said miss-procurement can also occur as a result of limited well trained personnel to handle procurement more effectively adding that when the due process is not followed in procurement may lead to a shift in competition and undue advantage conferred on undeserving individuals.

Davies stressed that the drafters of the public procurement Act for 2016 made it imperatively for a trained procurement officer to be appointed to serve as secretary to the procurement Committee whose responsibility is to advice the committee on technical aspects in the procurement process and mentioned that over the past few years the commission has investigate and charged to court many individuals who violated procurement principles.

He informed the gathering that they have recently asked for a procurement process to be terminated before a contract award due to failure to follow the due process adding that they as a commission believe that if only we tackle the problem of corruption in procurement as a nation, a greater percentage of Government expenditure could be saved.

He said the ACC wholeheartedly congratulated the National Association of Procurement Professionals (NAPP) with the hope that it will regulate its members in ensuring professionalism in the discharge of their duties and also advocate for a space to carry out their work without undue influence.
He encouraged members of NAPP to serve as whistle blowers in addressing corruption during procurement procedure through their Integrity Management Committees in MDAs.

In his statement, Country Manager of World Bank, Perminder Brar, said he is very much impressed with the establishment of the National Association of Procurement Professional to fulfill the desires of Sierra Leoneans.

Parminder Brar said Sierra Leone has a long way to go in terms of improving procurement approaches noting that the National Public Procurement Authority (NPPA) has put certain mechanism in place to improve on the sector but he quickly mentioned that much is needed to be done to fast track the implementation process in the segment.

He said World Bank is working assiduously with various countries to promote the system of procurement plan and mentioned that they have started to strengthen the institutional capacity of their member countries with the creation of the E-Procurement process.

Giving a brief background of NAPP, the Interim President, Mohamed Kallon expressed happiness to all participants for honoring their invitation within short notice to witness the historic launching ceremony of the association noting that they have been undergoing series of challenges in their various work place simply because they are working as procurement officials and condemned the public perception about them being corrupt administrators.
He said that is why they have teamed up to form this association and called on Sierra Leoneans to join them in complementing Government effort for the procurement of goods and services.

Speaking on behalf of NPPA, the Executive Director, Patricia Rowe told members to be more professional because according to her the profession is very much unique and needs to maintain standards at all level adding that the negative perception of the public is their main challenge in the fight to enhance good procurement methods.

She encouraged members to consider other concerned partners and the general public who may want to know other procurement practices in accordance with the laws.

Giving the key note address on behalf of the President of the Republic of Sierra Leone, Dr.Ernest Bai Koroma, the Deputy Minister of Energy, Engineer Hassan Barrie extended the President’s profound gratitude to the initiator of NAPP and he described NAPP as very new but public procurement is no longer new. He said the professionals who come together to establish the noble institution are not new in the field of procurement. He said public procurement was born in 2004 and reviewed in 2015. He described procurement as a single body that consumes large sums of Government expenditure.

The Deputy Minister said without transparent and accountable procurement officials, Government will continue to waste enough money and he further described procurement as the public arm of Government that is doing business with the private sector. He therefore appealed for people with unquestionable characters to be procurement officials or else we are wasting our energy and time. “These professionals are ready to be transparent and willing to give us value for money in whatever procured through them”, he assured and stressed that delay in procurement exercise has lead Government to loose many things and admonished that procurement should be done on timely manner with honesty and fairness. He said corruption will be minimize in the procurement arena through NAPP.