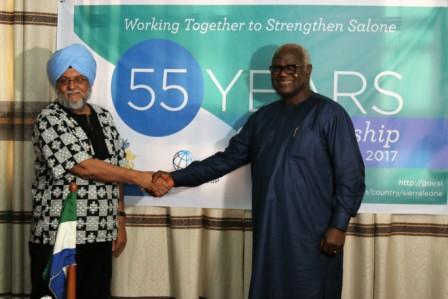 President Ernest Bai Koroma has acknowledged the World Bank Group’s contribution to Sierra Leone’s development efforts as the country and the Bank Group reflect on more than half a century of sustained partnership.

Sierra Leone joined the World Bank and the International Development Association (IDA) on November 13, 1962. The country’s membership with the Bank clocked 55 years last week. World Bank Sierra Leone Country Manager, Parminder Brar and team last Friday visited the President at State House in Freetown to formally inform him and the people of Sierra Leone about this landmark achievement.

“This is indeed a great moment for Sierra Leone, having had a relationship with the World Bank spanning 55 years; a relationship that has been very supportive,” said President Koroma.

In the course of the 55 years, the Bank Group as a whole has provided close to US$2.5 billion of funding to Sierra Leone that went towards supporting projects on infrastructural and human development, health, education, energy, social safety, the budget, and social services, among others. Most of the funding came from the World Bank but with substantial amount from the International Finance Corporation (IFC) and the Multilateral Investment Guarantee Agency (MIGA) – both members of the World Bank Group.

“It is a moment that the people of Sierra Leone would want me to thank the World Bank for the support that has been provided over the years,” noted President Koroma. “In all of these years of engagement, I can say that the relationship is now at its best more than ever, because we believe the interventions of recent have not only been doubled but it is the highest package that the country has received. This shows that the relationship has been growing in a sustainable level.”

Mr. Koroma said he was proud that he was leaving office at a point when the country’s relationship with the Bank was at a very high note. “We are happy about this achievement as a government, and personally I’m happy that I’m providing leadership at this point in time,” he intoned. “We hope we’ll continue with this relationship for many more decades to come.”

Country Manager Parminder Brar earlier informed the President that senior World Bank Group staff are planning on visiting Sierra Leone in January 2018 as part of the 55th Anniversary celebrations. However, he said it was important that the week marking the anniversary itself was observed because it was a “historic occasion both for the World Bank and Sierra Leone”.

To mark the occasion, Mr. Brar presented to President Koroma the first Economic Report done by the Bank on Sierra Leone in 1964. He said those were comfortable times when the country had more current revenues higher than current expenditures, and there were only 420 students at the university level at the time.

“I was speaking [recently] to the Acting Vice Chancellor of Fourah Bah College and he told me there are now 6,500 students just in the University of Sierra Leone,” he observed. “Sierra Leone has come a long way and we are privileged to have been with you throughout the journey.”