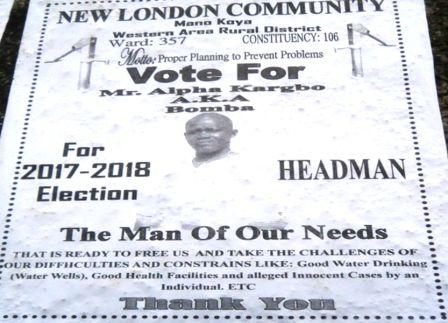 The New London community made this declaration during their community engagement meetings on the community ground with several stakeholders including constituency youths, traditional chiefs, religious leaders, markets women, ward committee members and the New London Social Association (NLSA) which consist of over one hundred dignified members on the 5th November 2017.

According to New London community occupants, they decided to declare for Mr. Kargbo for the fact that he is a son of the soil among all the other aspirants and he knows the needs of the neighborhood adding that he has the community at heart and that is why they thought it’s wise to elect him as their next Headman for 2017-2018 Headmen Election.

They said this young man has done great things for them at New London in terms of community development and transformation and mentioned that water and Light are their main challenges apart from other issues like access roads, security matters, religious houses, construction of new markets among others for the benefit of the area and even beyond the community level.

‘’The man of our needs’’ as he was fondly called by community members because according to them, he is always ready to free them from the challenges and difficulties which are affecting the vicinity in diverse ways adding that he has been a strong advocate for safe drinking water (water wells), quality health care delivery system and also help to curb crime rate in the locality, community stakeholders affirmed. They also emphasized the effort and courage which Mr. Kargbo has been executing during the past years before he was chosen to vie for this noble position  in order to strengthen the educational structures and women empowerment because they said according to him he wants to make sure that education is affordable and worthy for  children yet unborn.

They described Mr. Kargbo as a God fearing person who has a clean and comprehensive record in the constituency noting that he has accomplished many sacrificial tasks to improve lives of New London Residents.

Hassan Manso Kargbo to Declare on...