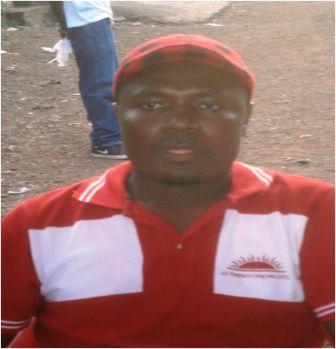 As he is described by his admirers among indigenes of Moko Town, Scan Drive, Hill Station and beyond at Wilberforce community, Constituency 128 in Freetown as their next Member of Parliament under the All Peoples Congress party ticket, Edward Kargbo has vowed to minimize or end water crisis in those communities if given symbol and elected to represent his people in Parliament in the forthcoming election scheduled to take place March 7th 2018.  (Photo: Honorable in waiting, Edward Kargbo)

He made this assurance at Moko Town in the said constituency last Sunday when he was addressing hundreds of party followers to support him acquired the APC symbol to win and respond to their cries.

Speaking to supporters who were curious to hear his message, the aspiring Member of Parliament for Constituency 128, Edward Kargbo started by describing the incumbent All Peoples Congress (APC) as a family party and he described the Wilberforce community as a stronghold of the APC.

“I don’t like to promise people because I believe in action than intention”, he told listeners and emphasized that His Excellency President Ernest Bai Koroma decentralized development in all part of the country. He described water as life for the fact that no human being or any other animal can function with the absence of water.

“I am your son and am going to step in to the shoes of the outgoing performing Member of Parliament (MP), Hon. Chernor Ramadan Maju Bah who also doubles as Deputy Speaker in Parliament for the past ten years and now running mate to Dr. Samura Kamara” he told supporters.

He called on supporters to throw their unflinching support on him because he said; it is only the blessing of the electorates that can take them to Parliament. He promised to end or minimise water shortage at the Wilberforce community within the first one hundred days (100 days) if given the opportunity to represent his people. He disclosed his long term plan to boost the education sector in and out of Constituency 128 because he said; a country cannot develop without sound education. He therefore called on parents to make sure their children go and stay in school until they go through their tertiary education. He encouraged constituents to repeat history in Sierra Leone by voting overwhelmingly for the APC.

He promised to not only upgrade the Wilberforce Village School but he would also join hands with the next Freetown Mayor to construct  a first class market at Wilberforce Village, empowering women by providing them with micro finance aid so that they will be able to send their children to school and take care of their homes.

Declaring the purpose of the meeting, the Chairman, Donald Davis commonly called Salone Trump said was to talk to all aggrieved members of the APC to support President Koroma’s choice of Dr. Samura Kamara and Hon. Chernor Ramadan Maju Bah aka Chericoco because, according to him, President Koroma consulted all party stakeholders and youths before pronouncing the two strongmen as the winning team for next election. He also stated that the meeting was to present the aspiring MP, Edward Kargbo as their choice for the next Parliamentary election. One of the APC veterans, Haja Elizabeth of Moko Town encouraged aggrieved members to be patient and to come on board so that they cannot be left out and he assured the gathering that the APC is going to win the next election in the first round of the ballot ‘Tolongbo’.

She thrilled listeners by singing a melodious song titled ‘APC Nar Wan Word’ adding that Moko Town has serious problem of water and asserted that they needed a redeemer like Edward Kargbo. He deliberated that they are going to support any candidate who may be awarded the symbol.

Chernor Mohamed 91 Sesay assured women that the Honourable in waiting, Edward Kargbo have them at heart and mentioned that he is the redeemer for Constituency 128.

Mr. Burnton from Scan Drive said Edward Kargbo has fulfilled his promise by not only bringing water to Scan Drive but has also offered scholarships to children in that vicinity and reiterated that, he will going to perform more than the outgoing MP, Chericoco while George from Hill Station encouraged members to cast their vote for him because he is going to put the problem of water shortage and Wilberforce Village market construction to an end. Representing Moko Town, Chairman Alpha Kargbo described the area as an APC ground and pleaded with Edward Kargbo to look in to their struggle to fetch water which has resulted to early pregnancy among girls and school dropouts.