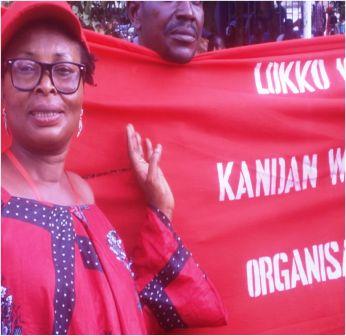 Delivering his candid statement, the Vice Presidential hopeful, Hon. Chernor Ramadan Maju Bah said the APC is a peaceful party that does not believe in fighting one another adding that the Leader and Chairman, President Koroma is a peace maker.

He encouraged all APC supporters to stay away from any activity that would ignite violence or chaos and supplement that the Kandad organization has been the first group of people he has officially met since the convention in Makeni.

“I came here deliberately to tell you that the election is in your hands”, he told listeners and urged Berwician to provide leadership to ensure APC match to State House, take over Parliament and Council. He said President Koroma chosen Dr. Samura Kamara because he has never killed a single soul. “Prior to our convention in Makeni, our opponent were saying that APC sit on time bomb because they were anticipating dispute to have aroused” said Chericoco and disclosed that they have proved them wrong for the fact that he said, all twenty eight former Presidential aspirants are now living together with one voice and message and mentioned that they have engaged the aggrieve set of people to stay afoot and echoed that  APC is going to win the March 12th 2018 election because they believe in action and we don’t want to go back to the odd days and he emphasized on the goodies APC has for the country. He described the APC standard bearer, Dr. Samura Kamara as a man who has managed the country’s economy very well and he is a key pillar in the Agenda for Change and Prosperity.

He spoke on the important to pay much attention to improve lives of women and youths and he officially premiered the Kandad organization.

The President and Founder of the Kandad Women and Youth Organization, Kannie Sesay who is also the Chairlady for Constituency 126 said they formed the organization to alleviate suffering among Berwician in Freetown and the entire country adding that they have been offering scholarship to various pupils. “My intention is to bring my people together to help the girl child and less privileged to be good people in society.  She called on Hon. Bah to contest for Constituency 126 because they still loved him as son of the soil.

The Chairman of the ceremony, Bernard Kamara described the launching ceremony as a home coming because the Vice President awaiting is born and groom at Berwick Street adding that the Founder and President of Kandad Women and Youth Organization, Kannie Sesay is a poor man’s friend.