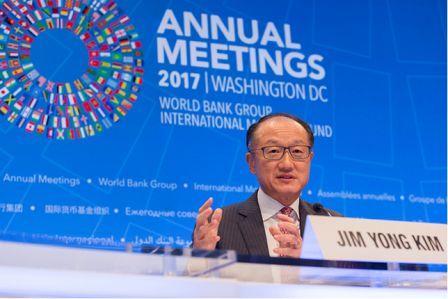 President of the World Bank Group, Jim Yong Kim, has called on world leaders to pay more attention to the investment in human capital to help grow their economies.

“We’re hoping that this project can show heads of state and finance ministers how long-term investments in their people can help grow economies and create the political space for leaders to make these critical investments,” Mr. Kim says.

Over the next year, leading up to the 2018 Annual Meetings in Indonesia, he says the Bank will be working with a wide range of experts in economics, global health, and education to develop the Human Capital Project. The Bank believes this effort has the potential to be a game-changer, in the same way its Doing Business report impacted when it was launched 15 years ago.

According to Kim, this is the latest effort by the World Bank Group to meet rising aspirations all over the world, truly create equality of opportunity, and build new foundations in the project of human solidarity.

On the Global Economy, President Kim says after several years of disappointing growth, the global economy has begun to accelerate with trade picking up, but investment remaining weak.

According to the new Africa Pulse Report, a bi-annual analysis of the state of African economies conducted by the World Bank, Economic growth in Sub-Saharan Africa is recovering at a modest pace, and is projected to pick up to 2.4% in 2017 from 1.3% in 2016.

However, the Bank’s Lead Economist and lead author of the report, Punam Chuhan-Pole, says the outlook for the region remains challenging and the moderate pace of growth will only yield slow gains in per-capita income that will not be enough to harness broad-based prosperity and accelerate poverty reduction.

As the annual meetings gets underway, over one hundred ministers and central bankers who are attending the gathering are expected to help set the agenda for the world’s economy in the coming year and chart the path forward on how to improve the lives of their people. Finance ministers and central bankers from our 189 member countries are in Washington to discuss the challenges and opportunities facing the global community.

Each Spring, the joint World Bank Group-IMF Development Committee and the IMF’s International Monetary and Financial Committee hold meetings to discuss the work of the institutions.

During the Spring Meetings, the World Bank Group and the IMF organize and host a number of related meetings and events, such as the Development Committee, the International Monetary and Financial Committee Meeting, the G-20, as well as the Program of Seminars and other events.