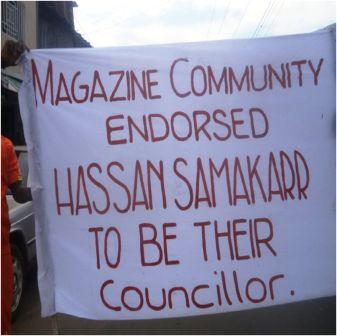 Over 5,000  young and adult supporters of the All Peoples Congress (APC) in their red T. Shirts last Sunday were singing and dancing with the aspiring Councilor for Ward 401 in Constituency 122, Hassan Kamara aka Samakarr when they were showcasing him to the Constituency Chairman at Malta Street Fourah Bay Community, Chairman Sitta.

Speaking to his supporters who were in jubilant mood, Samakarr encouraged all to remain peaceful and respect the rule of the exercise adding that he was happy because the mammoth crowd that behind him signified his popularity among all aspirants for the envious seat. “The people want me to represent them in the Freetown City Council because they know what I could do in terms of creating job facilities for young people, giving scholarships to young people and facilitate area development like rehabilitation of feeder roads and bridges”, said Samakarr and maintained that he is preparing to commission some tap borne water he has constructed to help address the acute water problem that was seriously hitting community people.

In that regard, supporters of Samakarr who has been identified as the ‘people’s choice’ are calling on the Constituency leadership especially Chairman Sitta to award symbol to Samakarr because they said, he is the only man that can boast of creating sustainable development among all aspirants in the said populated community.