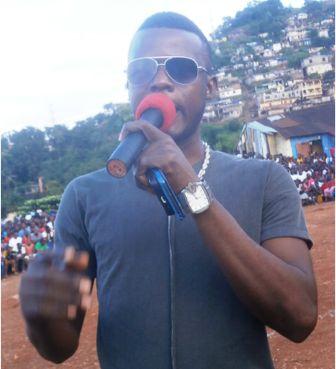 The former Presidential aspirant for Mercury Retailers Association, Ishmael Turay (in photo) has presented a surprising undisclosed envelope to Pacifists Organization as a means of supporting their final kick off activities which he described as successful.

Turay made the secret presentation to the Chairman of the organization, Abdul Karim Turay after the match that ended 1.0 in favor of Real Madrid against Chelsea local Football teams at the jam-packed Porshell Street Guinea Goal practicing Field on Sunday 10th September 2017.

Handing over the gift to the Chairman, Ishmael Turay said he was happy to see young people coming together adding that he did not made his presentation public because he believes in kindness and humanitarian attitude.

He encouraged members of the Pacifists Organization to continue organizing such programs so that they can foster love and unity in their midst adding that if young people are supported to the fullest the country will move to higher height and promised to always responding positively to the call of what he described as a  youthful organization. Cross section of the spectators

Receiving the undisclosed package on behalf of the organization, the Chairman Pacifists Organization, Abdul Karim Turay expressed gratitude to Ishmael Turay to give their noble organization a helping hand and emphasized that they will never forget to remember in their arrangement.

It could be recalled that Ishmael Turay contested last year for the Mercury Retailers Association Presidency but lost to Ibrahim Kamara aka Bosto who have held that position for decades.

However, despite the hurdles he went through during election campaign for the association Presidency, Ishmael Turay remains supportive to the organization and vowed to be a static member of the association until his days are over.