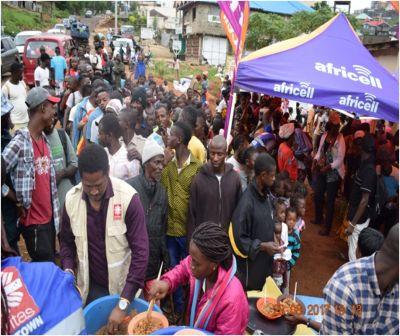 As they continue heightening their response to provide relief for the flood and landslide victims in Freetown, Caritas Freetown has provided successful medical treatment through its mobile clinic project to over one thousand victims of the alarming catastrophe that rubble our people when they were enjoying deep sleep in the early hours of Monday 14th August 2017.  (Photo: Programs Manager, Ishmael Alfred Charles, Children and mothers in the queue)

He pointed out that they are not working in isolation but in connection with the Office of National Security (ONS), camp management or command centre at Regent under the supervision of the Deputy Minister of Health and Sanitation ii, Zulaikatu Cooper.

According to him, they have supported about two thousand seven hundred people who suffered as a result of flooding at Culverts, back of Bomeh where no death reported adding that over three hundred homeless survivors are also receiving hot meal or dinner at Regent where many people suffered natural death.

In order for the food distribution process to go on normally without scramble in the long queue of hungry survivors, the Manager said, they categorized beneficiaries into various groups including the aged, pregnant women, lactating mothers,youths, and children so that nobody would be left out.

He pointed out that he would be biased if he fails to expressed gratefulness to their sponsors, TZU Chi Foundation and Healey Foundation because he said, they contributed immensely for the successful implementation of the course of action and he consoled hopeless Sierra Leoneans that they are with them and willing to render help in their own way at all time.

Speaking to some beneficiaries who were hopefully lined up in the queue to receive their ration expressed gratitude to the charity organization for their timely intervention adding that they are courageous because they believe that there are people at the corner who are always thinking about them.