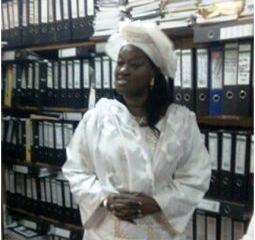 The Director of Budget in the Ministry of Finance and Economic Development (MOFED), Mathew Dingie in consonant with members of the Civil Society and other public officials have cleared the Environment Protection Agency Sierra Leone (EPA-SL) of any wrong over the 22 Billion Leones allocated to them and described figures presented by the Agency at the 2018 Financial Year budget discussion as accurate and accountable.  (Photo: Madam Khadijatou Jallow, EPA Executive Director)

According to Director of Budget, EPA-SL was stood down not because they didn’t account for the much trumpeted twenty two billion Leones (Le22b), but only for them to provide tangible evidence on how the said huge amount was expended and they have done just that transparently in presence of media practitioners.

Director Bah explained that apart from hiring foreign Consultants to formulate policies, they also pay for the whole building they are using as headquarters.

The learned Director raised that how can they pay salaries and allowances to staff of the institution when they are not getting subvention from Government?, he queried and disclosed that the authority started officially in 2013. He explained plan to establish offices in other parts of the provinces.

He made it clearly that EPA is not a revenue generating institution adding that even though disaster management is not their mandate but they always step in and work hand in gloves with the Office of National Security (ONS) and other lined bodies. He deliberated that they have about fifty professionals among the ninety three staff that constitute EPA.

He spoke about the national climate change strategic plan and emphasized on how they are very much concerned about issues of transparency and accountability and he called for public corporation to stop dwelling in disaster prone areas.

Director Bah stated that they are working in an open door policy and he therefore encouraged the media and general public to always visit their office at Old Railway Line in Freetown so that they can get accurate information for public consumption.