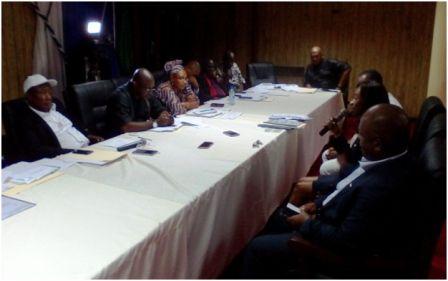 In a bid to enhance and promote football development in the country at International level, Parliament through the Parliamentary Oversight Committee on Sports is currently holding stakeholders meeting to address and finally put to rest the long time alarming impasses affecting the Sierra Leone Football Association (SLFA) in the country.  (Photo: Chairman Hon. Habib Bakarr Munda left opposite SLFA President Isha Johansen)

Having gone through series of dialogue to address SLFA saga at various stages including His Excellency the President Dr. Ernest Bai Koroma, Chairman on Committee on Sports Hon. Habib Bakarr Munda of Constituency 17 in Kenema district has responded to the long grown impasses in cautioning the Sierra Leone Football Association’s President of Madam Isha Johansen led executive on Tuesday 15th and on Thursday 17th August 2017, at Committee Room (1) Parliament Building at OAU Drive Tower Hill, Freetown.

Chairman Habib Bakarr Munda informed that the meeting came as a result of press release issued to respond and address the long alarming in fights in the football family adding that as Members of Parliament charged with the responsibility to caution those stakeholders in order to better understand between SLFA Secretariat, the Ministry of Sports and the Football stakeholders especially allegation regarding match fixing amongst others.

He said that his Committee is expected to engage stakeholders after meeting the Minister of Sports Ahmed Kanu and Madam Isha Johansen.

He commended their efforts on the development of football they have achieved over the years in the current leadership notwithstanding the impasse in the Football family including the seven man committee.

Chairman Habib also adding that as elected people’s representatives with the Constitutional mandate charge with the responsibility to monitor supervises the functions and operations of the F A to invite and summoned the leadership to hear both sides and allow them to express their concerns, issues of national interest for the development of football in the country.

Responding to the Committee President of SLFA Madam Isha Johansen expressed her appreciation to Parliament noting there is lot of sexism in footfall and naive in a manner how football should be.

Madam Isha Johnson cited how she was a good woman when she was managing the Isha F C  Johansen football adding that because she did not compromise and dance to others tunes that that always challenge and stand for the truth as strong women with all difficult tests decided to consider her a bad woman.

She noted that she cannot continue allowing the truth and compromise with politics despite being a woman adding that as Sierra Leoneans owned the country to deliver a positive change at societal level the positions they entrusted to perform their duties and responsibilities.

She called on Parliament to further probe and ensures the truth and put aside personal interest noting that as President of the FA is to ensure proper participation in pushing further the development of the country.

Isha Johansen also pointed out the issue of transparency and accountability items of finances between the FA and the Ministry; adding that political game play was also juxtapose with unfair manner with political fragile peace with integrity sports checks and match fixing

She said, due to her understanding noticed there has never been clear manifestation to go congress with frugal peace with match fixing that she also expressed dissatisfaction to such allegations with negative label as a country and appeal the meeting been a final meeting for the progress and development of the football in the country.

In his response, Minister of Sports Ahmed Kanu explained the current situation that been pluming in the football family that FIFA to have lead the dialogue of issues that surrounds the impasses which they arrived into an extra ordinary congress with the judicial bodies to lead to the resolution of the conflict.

He said that instruction and directives have been given by FIFA in order to hold on the congress as a result of integrity sports checks which according to him that they as Ministry has their different areas of responsibilities to perform especially him as the ministry sole guarantor between FIFA and the FA.

The Minister added that several dialogue meetings have been held particularly he said the tenure of the FA President had been expired which is very necessary for the FA to go congress for a democratic tenure of office or extension.

He said on that bases prompted the attention of Parliament through the Parliamentary Oversight Committee on Sports to mediate in order to better the impasses even though he said there is misconception between FA and the Ministry he added.

The Minister further expressed his plight stating that his interest on the outcome of the FA in bringing community’s integration and activities to ensure touristic development to ensure young people in the football family including other things as according to him the problem of the FA will only be solved through going to Congress and the President of the State.

Several comments, suggestions as well as recommendations were also been made in order to create more significant impacts by way of graving positive impacts for a holistic approach for permanent peace and stability regardless several press statements.