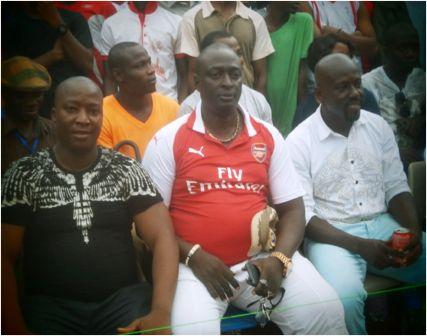 The jam-packed final kick off was organized by Friends of Osman Tunie Kamara and supported by the Honorable awaiting, Osman Tunie Kamara who is aspiring  for Constituency 105/123 Parliamentary symbol under the incumbent All Peoples Congress (APC) party. The competition which lasted for two months comprised twenty under twelve (U12) teams battling for the first position which goes for Le500, 000 and Le250,00 for runners up or second position.

Speaking to Sierra Express Media (SEM), the sponsor of the competition which many people described as the best ever in that vicinity, Osman Tunie Kamara said he was happy to be able to give opportunity for young people to exhibit their talents.

He encouraged young players not to ignite tension or cause unrest situation during the game because, he said it is only through such an exercise people could tap their talents and come to their aid adding that he has great passion to motivate young people to develop themselves through sports.

The Honorable awaiting said he has supported various Football gala competitions within Freetown and mentioned that the next competition which goes for Le1.5 million for first position and Le750,000 for runners up or second position will be organized at Possell Street playing grounds via Ginger Hall, Mount Aureole in Freetown.

He cautioned Fans to continue maintaining the good behaviors they have exhibited during the final play that ended four-two in favor of Pipe Line FC against Locust Stars.

The occasion was climaxed when Osman Tunie Kamara announced that he would not only give one year scholarship to Saio Kallon who won best player and Golden Boy of the tournament but he will also responsible to provide all Football gears for him to go on with his carrier. He encouraged him to keep the flame burning because he said; he has more time to exhibit his talent to the highest point.