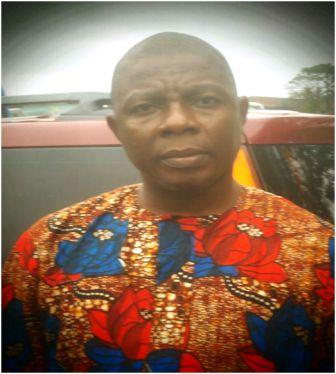 One of the 2017 Hajj Pilgrims that stranded at Youyi Building in Freetown throughout last week in an effort to visit the Holy Qabbah in Mecca, Sheikh Alhassan Kargbo who is the Imam for Masjid Ibadu Rahman at Martin Street and working for the Ministry of Foreign Affairs and International Corporation has explained in a sad mood how they were neglected by concerned authorities at the said place. (Photo: Sheikh Alhassan Kargbo)

Speaking to this medium while waiting hopelessly, the Quranic scholar firstly highlighted that the situation at Youyi Building was deploring as he said they were shocked and surprised to be treated as foreigners at Youyi Building by closing the toilets with instruction by top management that it would remain locked.

He maintained that most people came from outside Freetown and abandoned just to be perishing without accommodation to sleep, any food and water for sustenance.

The learned Imam said there is a Hajj Committee responsible for all affairs but he continued clarified that he made to understand that the Hajj Committee Secretariat has no direct control on activities of Pilgrims adding that some Hajj travellers go through a Government sponsored scholarship scheme.

However, the Man of God blamed Hajj Secretariat for what he described as poor planning and admonished them to review their operation methods.

He said he would not associate the recent landslide and flooding as a factor to the late departure of Pilgrims because according to him, Government has set up special bodies responsible for Hajj affairs.

He concluded by recommending that committed people should be appointed to oversee such important spiritual program so that they can address issues on time.