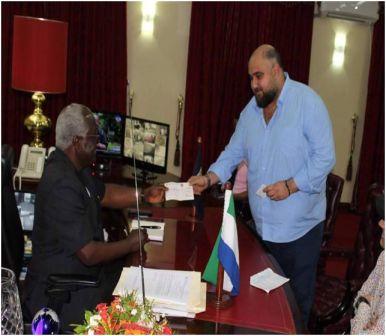 Leading Sports Betting and Lottery Company, Mercury International through its Charitable Foundation presented a cheque of Le 400 million to President Dr. Ernest Bai Koroma at State House to support the government’s emergency response to affecters of the August 14th deadly flood and mudslide that left hundreds dead and hundreds of properties lost.

The presentation is in response to the ferocious mudslide  as a result of a torrential rain which lead to the huge loss of lives and properties and thousands homeless in the nation’s capital Freetown.

Presenting the cheque, the Operations Manager, Mercury International, Mr. Joseph Harb (in photo) who was in grief, told the President that, on behalf of the board of Directors, Management, Staff and Retailers, Mercury International wishes to express its deepest condolence to the victims of the flood and mudslide, their families and the people of Sierra Leone, in this national tragedy which has cost the nation so many precious lives.

“Our prayers and hearts are with the souls of the victims and we wish a speedy recovery to the injured in the various hospitals”, Mr. Harb concluded.

Receiving the cheque, President Ernest Bai Koroma applauded Mercury International for their quick and timely response to compliment government’s effort to support the victims and assured that the money donated would be used for the intended purpose.

The President in turn handed the cheques to the Office of National Security Coordinator Ishmail Tarashid Tarawalie who is the head of the established government’s emergency response committee.

This is not the first time Mercury International is complementing government’s effort during difficult moments, Mercury has always been supporting the government financially and materially during unforeseen circumstances like this.

Furthermore, Mercury International complemented the effort government during last year’s flood that left some people dead and hundreds homeless with a total of Le500 million.

Also, Mercury International donated the sum of Le100 milli0n to the Fort Street fire victims last year through the Office of National Security(ONS) and the Honorable of the constituency Manley Spain.

Mercury International as a Company has exhibited high degree of adhering to it Cooperate Social Responsibility throughout the Country ranging from yearly scholarships, yearly donation to aged, financially supporting sporting disciplines, constructions of schools, yearly donation to the disabled etc.