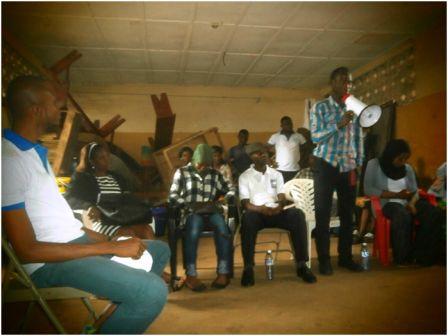 The event which was sponsored by Friends of Social Work in the United States of America (USA) held at the Susan’s Bay Community Centre attracted various young men and women with theme “Inner peace is a solution to youth productivity and friendly social environment” on 12th August 2017.

In his opening statement, Founder, SWSL, Hassan Koroma said the global theme for this year is “Youth building peace” which he said is gearing towards encouraging young people sharing peaceful messages and ideas in an interactive manner. He entreated youths to develop inner peace among themselves for love and respect to prevail.

Koroma cautioned youthful participants to feel free, happy and relax their minds because he said; the International Youth Day celebration was created by the United Nations to remember their potentials. In order to foster peace among Susan’s Bay future leaders, the dedicated social worker dance and shared peaceful smile with participants who are known to inhabit in one of the most deplorable slum communities in Freetown.

He pointed out that SWSL provides social services in a healthy manner to help elevate depressed people in societies through training and counseling and mentioned that the objective of the program was to bring peace in the minds of young people in that vulnerable society. He described the event as a learning session that would build and strengthen peaceful co-existent in society.

Hassan Jalloh from UNDP cautioned participants not to feel left out in society because they are living at Bay but they should believe that they have the ability to produce successful people in society because he affirmed that most successful people today were sufferers. He emphasized that if young people think big, they will achieve their desires.

He claimed that young people have responsibility in life for the fact that they should determine what they want to become and sensitized them not to disregard their families, community elders and the nation as a whole. He admonished youths that it doesn’t matter where you come from or who you are but how one can respond to the event of life.

Brother Nelson Norman expressed happiness to see smile on faces of participants and maintained that SWSL always want to see people overcome their problems and mentioned that youths inner abilities can only be exhibited if they allow peaceful atmosphere to exist. He encouraged participants whom he described as ambassadors for their community to spread whatever they learn to those who are not fortunate to be part of the training.

Lansana Fofanah from Fourah Bay College (FBC) said the 2011 Sierra Leone Human Development Report defined youths as people between 18-35 years and disclosed that 1.5 billion young people made up the world’s population. He noted that 70% of African’s population falls under the youth age bracket and mentioned that children and the aged constitute 35% of the global population. He advised young people to be hard working so that they cannot only be spotted by influential people but could also be important individuals in any place they might find themselves.

Fatmata Barrie said young people are targeted because they are the direct beneficiaries of the designed celebration and called on them to embrace themselves so that they can always be considered to take part in decision making. She encouraged all listeners to consider themselves as important people than those old men and women devoid of education.

Sister Patricia Aki Yemi from Nigeria described youths as not liability but permanent assets but he quickly cautioned them to be determined by working restlessly so that they can be influential people anywhere they find themselves.

Lands Ministry is the most corrupt...