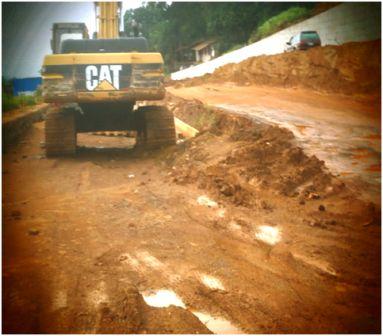 Many citizens and non-citizens residing at Hill Cut road, Wilberforce, Hill Station and other environs have raised grave concern over the status of the Hill Cut road that has for the past three years been under construction by one of the sons of Sierra Leone, Ahmed Gento Kamara with no sign of improvement till date. This road, which is now a garage for excavator machines and other vehicles according to residents of the area has now become  a death trap for users especially vehicles and pedestrians plying that route.

Many are now of the belief that Gento is incapable of constructing this road because according to them it is over three years now since he was contracted to do the road but till date, the road construction has not shown  any sign that it will be completed any time soon. In fact it is now use as a garage by Gento where broken vehicles and machines including excavators are packed. ‘’Gento is really a disgrace and disappointment to the nation,’’ frustrated residents along the road  bemoan adding that they were among those advocating for the local content policy to be implemented in order to  ensure that our nationals benefit from contracts and other jobs they can perform ; But to their greatest disappointment, Ahmed Gento Kamara has failed them woefully. They are now wondering as to when this road will be completed. ‘’Are we going to wait till thy kingdom come before it is completed?’’ they asked.

They therefore called on all stakeholders concerned to look for another competent company that will construct and complete the road in order to save the lives of thousands of Sierra Leoneans whose lives are under threat due to the condition of the road.