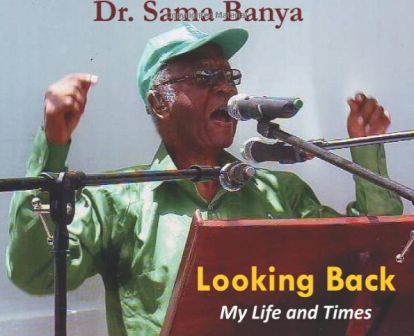 Just before the publication of my autobiography “LOOKING BACK, My Life  And Times” I stopped writing; I stopped active political activities except that I would go to SLPP headquarters and pour the Libation to the Founding Fathers and past Leaders. Nobody seeing many of the photographs of the damage caused by mudslides especially the loss of life and to a less extent the buildings and property could fail to be awestruck, depressed by the devastation and remain silent.
The site of all those naked and lifeless bodies piled up like products of a successful hunt at the Connaught hospital mortuary is so depressing that not even the most heartless would be moved to sympathise with the victims and their families. I am particularly saddened that many if not most of them were not the cause of the disaster because they may just have been hapless tenants in search of accommodation anywhere.
But when all is said and done and even before that, questions must be raised.  Fingers must be pointed and with justification.  Why did it happen and more importantly did it have to happen?
In my more than 20 years as a founding member and honorary President of the Conservation Society of Sierra Leone  we were engaged and continue to be engaged in advocacy and creating public awareness of the need to look after our environment.  In one of my numerous newspaper columns I quoted the late Reverend Trevor Huddleston after his visit to the hospital bed of a dying Dame Barbara Ward who said him, “We have only one world is it not worth our love. Is anything too much to do to preserve its future?”  With acknowledgment I applied the statement and question to our country, “We have only one Sierra Leone is it not worth our love?”
Under late President Siaka Stevens, chairman of the NPRC and head of state Valentine Strasser, late Presidents Joseph Saidu Momoh and Ahmad Tejan-Kabbah as well the current President Ernest Bai Koroma, much international support and appeals have come for environmental protection.
We held workshops with our rural farming communities who appeared to have a clearer understanding of the issues than we credited them.
I remember reading of a visit to the Regent community area and to the catchment areas of the Guma Dam by the previous Agriculture and Forestry as well as the Lands and Environment Ministers respectively. They threatened hell’s damnation to all who would build on the tops and slopes of the western area peninsular forests. Nobody took the slightest notice; the buildings are still there and more are coming up.
In Kenema, right under the nose of the security people at Bandama, and in one case directly opposite a bold advocacy bill board by the Environmental Protection Agency about Climate change being real and already with us, there have been clearing of the Kamboi hills for farming and extension of human settlements.
Within the Freetown Urban area buildings have been erected in some of the most unsuitable spots because the owners are powerful with the usual connections.
What I am trying to say here is that Environmental degradation and destruction is going on as if it is a race between that and doomsday. As a result of this we have all been compelled to look on helplessly in despair. We have screamed warnings that we shall have a price to pay at some time if the authorities cannot effectively protect our heritage for future generations.

That time isn’t even here yet and Nemesis has descended upon us and there will be more to pay. Those of us who go through the tough experience of water in the dry months will continue to pray for a longer rainy season so as to minimise the drought periods.  There may still be time left for damage control but only just.
Along the old road to the provinces there were a series of warning signs as the dangerous Orugu Bridge and hill were approached. It read, “Slow down, dangerous bridge and curve;” and just before the final descent the sign had a human skull and bones and simply said, “You have been warned.”
Shall we listen after the events of last night and this early morning?
Yes, we have been warned but not for the first time.
PUAWUI….DR. SAMA BANYA
Stay with Sierra Express Media, for your trusted place in news!

As Hill Cut Road Turns into a Gara...