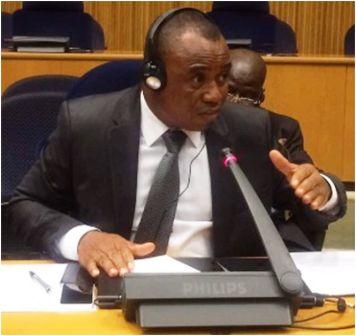 Mr. Chairperson: At the outset, allow me to congratulate you and the Federal Republic of Nigeria for convening today’s open session on Child Soldiers/Out of School Children in Armed Conflict. We commend the diplomatic community for their participation. Undoubtedly, we all share a fundamental responsibility to once again take stock of progress on key protection issues that affect children caught up in conflict situations.

An estimated number of over 10 million children in the world are directly affected by diverse and brutal violence in countries and communities that are engulfed with armed conflicts. These children had endured and continue to endure grave threats posed by armed groups, which include some of the worst human rights violations a child could experience: abduction, forced recruitment, injury, torture, sexual abuse, death etc. These violations were shamelessly applied as weapons to subjugate and humiliate communities.

A greater number of abductions were committed by non-State actors like the Boko Haram terrorist group in the Lake Chad Basin and the anti-Balaka and ex-Séléka armed group in Central African Republic. We saw similar tactics been applied by other terrorists and armed groups in Mali, South Sudan, and other communities outside Africa etc. The international community needs to adopt more effective action at political and diplomatic levels to prevent the recruitments or conscription of children. We commend the United National Security Council for adopting the land mark Resolution 1612 in (2005) and call upon Member States to adopt national action plans in compliance with this resolution.

Mr. Chairperson: The children of the world should be students, not soldiers. Education is a fundamental right of all children-not aspirations. We need to embark upon outreach and awareness raising campaigns to discourage children from joining armed groups and call upon warring factions to stop attacks on school and actions that impede children’s access to education, including the military use of schools. Like the Republic of Sierra Leone, the PSC should call upon all Member States of the African Union to sign, ratify and implement the Safe Schools Initiative as an essential mechanism to protect education during conflicts.

It has now become a notorious practice among armed or terrorist groups to attack institutions where vulnerable groups like children invariable seek refuge during armed conflicts. Why should armed groups use schools, churches, hospitals and universities for military operations? Why should they target school children? Does abducting young girls a solution to internal political problems? One cannot imagine why armed groups use sexual violence against girls as a weapon of war. My delegation condemns, in strongest terms the use of these institutions and ensuing criminal methods as tactics of war.

We also urged States to sign the Additional Protocols to the Geneva Conventions and the Optional Protocol to the Convention on the Rights of the Child, as well as adhere to the 2007 Paris Principles.

The illegal transfer of small arms and ammunitions into the hands of non-state actors is another phenomenon undermining the protection of children in Africa. The United Nations Arms Trade Treaty (ATT) proscribes the transfer of arms and ammunition into the hands of illegal end users. Council should call for accountability mechanisms for the illegal transfer of small arms, light weapons which naturally results to grave violations against children.

Mr. Chairperson: In the specific case of Sierra Leone: The period between 1991 to the year 2000 heralded the use of child combatants or soldiers by the rebel group known as the Revolutionary United Front (RUF) and the military junta during the decade – long civil conflict. This period also witnessed the proliferation of small arms and light weapons in the country. An estimated number of 4,500 children were conscripted as combatants or child soldiers. These children were forced to commit murder, rape, sexual slavery, mutilation and other forms of human rights abuses. This inhuman act of conscripting children as combatants coupled with the atrocities committed by and against them attracted national and international attention. In January 2000 hundreds of peoples marched through Freetown, the capital city of Sierra Leone to protest the recruitment of children and demanded for such children to be released and reunited with their families.

On 21st January 2000, the government operationalized the Optional Protocol to the Convention on the Rights of the Child. This protocol prohibits and criminalizes the use of children under age 18 years old in armed conflict.

By the formal declaration of the end of the conflict in 2002, it was obvious that the future stability of Sierra Leone largely depended on the ability of the newly democratically elected government to provide access to education, skills training and employment for the former child combatants. With the support of International partners, humanitarian and non-governmental organizations, the Disarmament, Demobilization and Reintegration program was successfully concluded on 31st December 2003 with an estimated 7000 children registered for the program.

In compliance with Article 39 of the Convention on the Rights of the Child to which Sierra Leone is a signatory, the Government established the National Commission for War Affected Children (NaCWAC) by an Act of Parliament in January 2001. The Commission was officially inaugurated in January 2002. The main purpose of the Commission was to provide the requisite environment of psychological recovery, and capacity building of the war affected and other disadvantage children, for expeditious reintegration into communities and families. The Commission’s additional functions included (1) monitoring the implementation of the Peace Agreement and DDR (2) Limiting the proliferation of Small Arms and light weapons (3) Increase attention and awareness of the problem etc.

In a bid to enhance stability following the successful DDR program, the government in collaboration with international community and the United Nations Security Council, established the Truth and Reconciliation Commission and the Special Court for Sierra Leone respectively. These transitional justice mechanisms were designed to heal the society and prosecute those who bore the greatest responsibility for crimes against humanity committed during the civil war. Of course the crimes included abduction and conscription of child combatants. It is now a judicial precedent established by the Special Court for Sierra Leone and reaffirmed by the International Criminal Court in the case against Lubanga of DRC that conscription of children as soldiers or combatants is a crime against humanity that warrants punitive sanctions.

In conclusion, the timing of this open session cannot be more appropriate, given that our continent is still grappling with a number of conflicts. In particular, the spate of extremist activities in the Sahel and the Lake Chad Basin is regrettably leading to extensive loss of lives (children inclusive as combatants) and massive destruction of property. Sierra Leone strongly condemns such cowardly acts and will continue to work with Council and the International Community in seeking lasting solution to protect children in armed conflicts.

As Hill Cut Road Turns into a Gara...