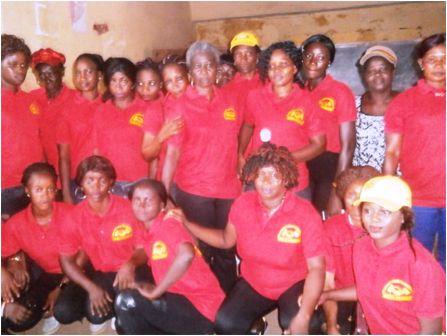 The Guest speaker, Rugiatu Mansaray expressed happiness for the launching of what she described as another strong female group adding that it signified progress and unity among themselves.

She urged colleagues to commit themselves in developmental activities that would benefit the entire Foulah Town Community which she labeled as the most populated zone in the eastern part of Freetown Municipality. She emphasized on the way and manner the community is surrounded with competent, talented and law abiding citizens. Guests at the high table

Madam Mansaray furthered that they as women must not left behind but to work side by side with their male counterparts as far as development is concerned and disclosed that she is ready to partner with fellow women to bring more development in the locality as an advocator and also as a politician. She emphasized on the important of women in any society and cautioned colleague women to love one another to maintain peace and unity.

Speaking on behalf of the Foulah Town Football Association (FTPWO-SL), Alhaji Alpha Rashid said he was there as a stakeholder to grace what he called august meeting and mentioned that the meeting was timely and important for the improvement of the vicinity especially   at this moment when the community team has been crowned champion for the 2017 inter area community Football at Parade Field on Circular road in Freetown.

He therefore declared the organization launched and assured members of the group that they are always willing to support them at all time when the need arises. He personally donated two million Leones to FTPWO-SL. He bestowed confidence that the event was just the beginning.

In his response, Chief Consultant of the female organization, Gba Kamara expressed appreciation to all those that grace the event and he encouraged other to copy such an important initiative for community development.

“I am a resident of the particular area for many years and I know the numerous challenges the community is facing especially with regards to security matters which he said, is paramount for the vicinity and the country as a whole. He admonished all members to stay focus and concentrate on the development of their locality.

Delivering vote of thanks, Secretary General, FTPWO-SL, Mariama Conteh demonstrated thankfulness to all those who abandoned their busy schedule to grace this important ceremony and disclosed that the community has a lot of potential people who are roll model in society.

She concluded by issuing piece of advice to all young people to stay away from violent activities and concentrate on productive activities to accommodate peaceful existence for all.