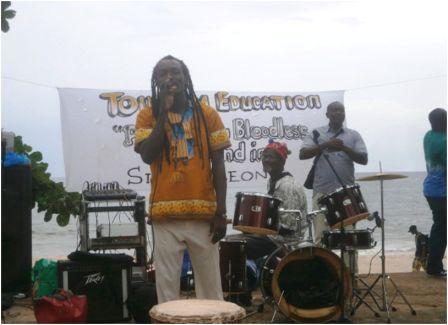 The launching which attracted several musicians, Member of Parliament, the media and the general public was held at room one in Parliament on Monday 3rd July 2017.

Speaking on the project proposal, the Sierra Leone Music Ambassador to Europe, Osman Obai Kamara commonly known as Obi Phrase said they used the theme “Post Ebola Bloodless Diamond in Sierra Leone” in their campaign because Sierra Leone has been coined as a Blood Diamond country as a result of the eleven years civil conflict.

Obi Phrase maintained that they are using music, drama and art to rebrand Sierra Leone through their own little way. He explained plan to travel to some European countries like Estonia and Sweden on cultural performances to spread the good picture of the country.

He maintained that the Ebola Virus Disease (EVD) outbreak exposed the weaknesses of our health sector evidenced by unequipped hospitals and shortage of medical professionals. “This is the reason we are calling on our colonial masters in France, United Kingdom, and United States of America to come and join the rebranding process in Africa,” said the music ambassador.

Phrase pointed out that the project will encourage more foreign investors to come and do business in the country adding that Ripsta Culture is implementing the project for the entire country in connection with Tourist Board, Parliamentarians and Office of Diaspora Affairs. He said the project is currently self-sponsored but they will soon approach Ministries Department and Agencies (MDA’s) for support. He concluded by re-echoing that Sierra Leone has been transformed from Blood Diamond to bloodless Diamond.

The Member of Parliament for Constituency 082 in Moyamba District, Hon. Gladys Brima described the occasion as a very powerful engagement which has to do with national development. She averred that we can be able to enjoy ourselves out of the rich culture the country endowed if it is properly marketed globally.

She thanked Ripsta Culture to have done what she described as very good initiative for the country and Africa as a whole. “Obi has promoted this country internationally” she lauded and assure that the group will have the support of Parliamentary leadership. The Director, Department of Parliamentary Assistance Coordinator (DePAC), Madam Finda Fraser used the opportunity to thank Ripsta Culture for using musical and Cultural performance to rebrand the country adding that the initiative comes at the time it mostly needed.

She informed audience that it is quick and easy to educate people through music and ended by expressing hope that Government will embrace such a brilliant idea. As it geared towards making Sierra Leone a prosperous nation.

Communication Officer in the Office of Diaspora Affairs, Alex Fornah entreated that ODP was established in 2008 by His Excellency President Dr. Ernest Bai Koroma to coordinate Sierra Leoneans in the Diaspora to respond to the country’s development adding that Ripsta Culture is the most active Diaspora organization they are working.