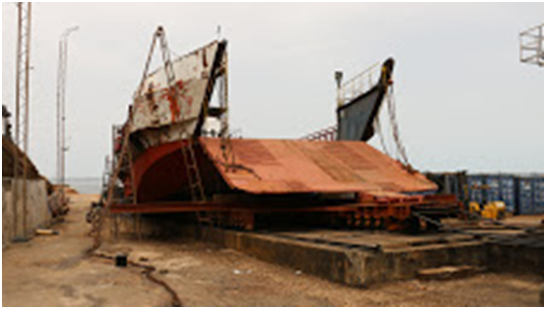 Ferries serve a very useful purpose for travellers in and out of Sierra Leone. They are popular with most people because they provide cheap transport, connecting the capital Freetown to the township of Lungi, which hosts the nation’s only international airport. Demand for their use is high as they offer the shortest distance between the airport and the city, cutting straight across the mouth of the estuary.

Sierra Leone is unique. It is a country where its capital city, Freetown is on a hilly peninsular, cut off from its international airport and the hinterland by the Targrin Bay that is on the Atlantic Ocean. Incomes are low, and the primary means of transportation for the common people has always been canoes or ferries. Canoes can be dangerous during the rainy season when storms are common in the bay. Ferries are the most popular option since the crossing at the narrowest point takes about an hour compared to a three to four-hour journey by road. The cost per passenger is cheap at Le4, 000 (US$0.53 cents) per person including baggage. It is primarily market women and traders who make the daily crossing.

Recently ferry transportation was disrupted due to frequent mechanical breakdowns and siltation at the landing stations. This disrupted normal commerce caused major inconvenience to local residents and traders. Some students who attend school and tertiary institutions in Freetown from Lungi had to settle for wobbly and mostly overloaded wooden boats to ferry them across the waterway. For those who could not abide the risky trips, the result was a temporary suspension of their classes.

In May, only the MV Freetown ferry was operational, while the MV Murzuk was undergoing major repairs. Travelers and business people alike complained about the discomfort they faced having to contend with the situation. They had to arrive very early at the terminal to be assured a place. Vehicles would be turned away for lack of space or wait their turn in the queue for hours.

“The ferry issue is a big problem. It is affecting us negatively. Only one ferry is running at the moment and despite my flight being at 8:30pm, I have to come early,” protested Abdulai Kamara, a Sierra Leonean based in the UK. He was returning to London with his wife and child after a month’s holiday in Freetown. “We had to leave our home very early this morning so as not to miss the ferry. This is really not good. There should be regular transportation to calm public doubt in the system.”

Kamara prefers the ferry to travelling by road, in spite of the hassle he and his young family go through every time they come home on holiday. “Depending on this system of a ferry is not good enough; I think a lot of improvement needs to be made,” he said.

Mrs. Mary Kallon owns landed property in Lungi, which requires her to make regular crossings from Freetown as she undertakes some development to her land.  Her concern was the inconsistency in the ferry schedules.

“You come in the morning hoping to cross over with the 8:00am ferry, only to find that the schedule has changed. This is very unsettling, because you’ll have to spend another three to four hours waiting, when you could have utilized that time doing other useful things,” she cried out. “Only one ferry is running at the moment and this is affecting our programs for the day. We need more ferries to deal with the growing transportation needs of the people.”

However, this break in ferry service prompted the government to request an intervention of the World Bank to salvage the situation. The Bank, through the Investment Climate Facility (ICF), intervened and provided budgetary support amounting to US$2 million to the Ministry of Transport and Aviation to ease the problem. The funds allowed for the purchase of brand new engines and major spare parts for the required repair of the two ferries.

These ferries – the MV Bai Bureh and MV Mahera – are currently on the slipway at the Holland Shipyards, undergoing major overhaul. Holland Shipyards is a reputable Dutch ship building company with over 100 years’ experience; it now runs the marine slipway at the Queen Elizabeth II Quay, Cline Town, and Freetown’s natural harbor. Their engineers are virtually tearing the vessels apart, replacing all the metal work, the under-carrier, re-doing electrical, upholstery and painting.

Technical Superintendent, John Degraft, says the damage done to the ferries was colossal and they are apparently rebuilding the vessels.

The bilges are being reconstructed using 8mm metal plates for the underwater system and 6mm for the hull. The dismembered beams and bowman’s compartments will be replaced, as well as the floor and roofing.

In the past, broken ferries were towed to either Abidjan, Cote d’Ivoire or Dakar, Senegal for dry-dock repairs. Now all ferry servicing works are provided at the shipyards in Freetown.

Degraft says the timeline for repairs to be completed is 20 weeks, and he’s optimistic this is achievable.

Operations Director, Cor Schutter, says money for the repair work has been made available and they will ensure the ferries resume their runs to address the transportation difficulties currently being faced by many.

Transport and Aviation Minister, Leonard Balogun Koroma, describes the World Bank intervention as “a welcome departure from the traditional norm we’ve known the Bank for in this part of the world”. He says the impact of the support is tremendous and that Sierra Leoneans are satisfied with such positive response from the Bank.

Once the ferries start running again, the Bank will assist the Ministry of Transport and Aviation with a charter service for two years, to cushion the effects of the shortage of the ferry runs. This will enable the Ports management to make even more runs.

“I want to thank the Bank for this timely intervention…. I hope going forward we’ll cut the red-tape, the bureaucracy for which the Bank has been known in the past. This will start a new chapter in our collaboration and relationship,” he says.

General Manager of the Sierra Leone Ports Authority (SLPA), Abu Bangura, says they had outsourced the ferry service to a private operator because they believed “the private sector would run a very efficient service”. “Unfortunately in this case, a private sector operator failed to maintain the ferries and as a result, we are where we are today. So the government had to step in,” he says.

“With support from the World Bank, we are in the process of repairing the ferries. We’ve been to the shipyard to see how the work is progressing, and we are impressed. We believe the engineers will meet their timelines.”

Bangura says within three to six months, all the ferries will be working and serving the public until new ones are acquired. After the repairs, the Transport Ministry will undertake “a fair and transparent procurement procedure” in which a concession will be granted to a private operator to run the vessels.

Aside the ferries, the SLPA have signed a contract with a private sector operator for the construction of a multi-complex facility that will include a conference hall, passenger terminal and lodging. This, Bangura says, will be another step in their pursuit to upgrading the infrastructure of the Port.

The World Bank responded to a real need expressed by the Government of Sierra Leone and was able to provide a new lease of life, not only to the ailing ferry system of Freetown, but reduce the transportation challenges that were affecting local and international travelers in and out of the country.