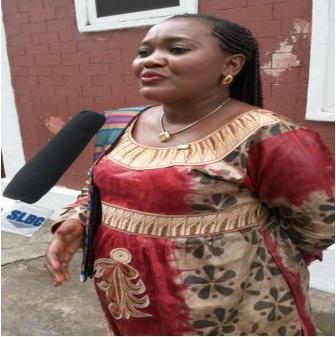 In a bid to enhance and promote food self-sufficiency and sustainable growth in the country, Food and Agriculture Organization (FAO) In collaboration the Ministry of Lands Country Planning and the Environment ( MLCPE) and Action for Large-Scale Land Acquisition Transparency (ALLAT) on Wednesday 21st June 2017, commissioned a one day ultra-modern training sensitization session for Members of Parliament (MP’s) on the Voluntary Guidelines on the responsible Governance of Tenure of Lands, Fisheries, and Forests (VGGT) and the Sierra Leone National Land Policy.  (Photo: Chairperson on Committee on Lands, Country Planning and the Environment Hon. Rosaline J.K. Smith)

The session also attracted several Parliamentarians in ensuring a holistic approach on National Land Policy entrenched in the country’s national Constitution in the context of food security, transfers of other challenges to tenure rights and duties, Legal recognition and allocation of tenure rights among other things were also been discussed.

In an exclusive interview with this medium, Chairperson Hon. Rosaline J.K. Smith spoke about the impacts discussed that the training session is to sensitized and better understand Members of Parliament about the significance of the National Land Policy that been launched at State House this year by His Excellency the President Dr. Ernest Bai Koroma.

She said the three Committees are inter-twined towards the Land tenure in the country that is expected to be tabled in the House of Parliament on Land Laws with some amendment which Parliamentarians needed to better understand the relevant issues regarding Land issues in the country.

Hon. J.K. Smith cited some of the issues been centered around discussion including problem affecting access to land, land rights to vulnerable women, the right to women, youths, life scale investments with community holders, resolution of disputes over tenure rights among other things.

She added that the session also critically focus on specific quantum of land space given to life scale investments signed with informed community stakeholders particularly to prevent international investors implementing development programs without community consent that have been fomented series of problems amongst various communities.

Despites series of challenges Hon. Smith also noted that there is much need to review the Land policy and enact stiff laws especially land grabbers and doable selling which according to her if ratify land tenure will be address those challenges she assured.

Presentations of various land topics including questions and answers as well as recommendations were also been made by MP’s in order to create more significant impacts on the Voluntary Guidelines on the Responsible Governance of Tenure (VGGT) implementation in Sierra Leone by Christian Schulze FAO Representative, National Land Policy implementation plan by Alphajoh Cham from the Ministry of Lands, whilst remarks was also been made from representative of Civil Society Organization (CSO) on the National Land Policy key messages to Members of Parliament among other things respectively.