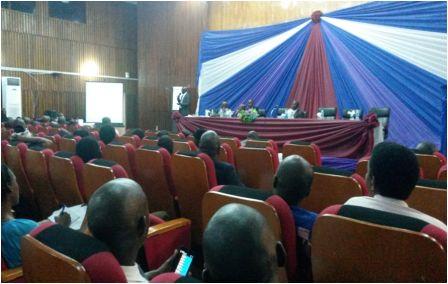 Deputy Director General of National Revenue Authority (NRA) Ibrahim Sorie Kamara in his opening remarks noted that , the workshop is part of their efforts to continuously sensitized and educate their esteem valid customers and stakeholders on the importance of domestic revenue generation mobilization for the socio-economic growth coupled with their desire to promote voluntary tax compliance.

He said the workshop will be followed with paper presentation on various topics gear towards promote voluntary tax compliance on the role and challenges of tax administration in an emerging economy among other things.

Commissioner Ibrahim Sorie furthered that, over the years the country’s economy experienced two major shocks that decline in commodity in mobilizing the much needed revenues in order to meet their target government’s key priority in sustaining its recurrent and capital needs among others.

The purpose of the workshop he said to strengthening their position and to ensure key players cooperate and boarded to enhance and promote voluntary compliance in order to discuss and consult with various stakeholders to strengthen domestic revenue mobilization through in a voluntary manner for the way forward in a holistic approach.

Several issues among other things were also been discussed during the workshop considered to have been repositioned the Authority to strengthening its tax administration and to diversify its revenue collection efforts to fill in the gap whenever the core areas of revenue mobilization seem to be fluctuating.

Paper presentation were also been made in order to create more significant impacts amongst topics required on domestic tax compliance includes, the Ministry of Finance and Economic Development (MoFED) on tax policy and macroeconomic dynamics influence and revenue collection, Institute of Chartered Accountants of Sierra Leone (ICASL) the role of ICASL in regulating and providing enabling environment for account in promoting voluntary tax compliance, KPMG the role and challenges of accountancy of auditing farms participatory voluntary tax compliance domestic revenue mobilization, and administrative policy and Legal challenges in tax administration revenue mobilization and the way forward by the Deputy Commissioner of NRA Ibrahim Sorie Kamara respectively.