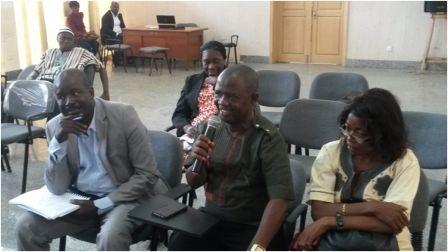 During a Parliamentary Summoned by the parliamentary Oversight Committee on Local Government and Rural Development to account for funds given to them by the government of Sierra Leone for the rehabilitation of culverts, bridges and other developmental activities amounting to the tune of Le800 million, the Bo City Council shamelessly stole the personal development achievement of  Hon. Mohamed K. Tholley of constituency 072 Bo district by claiming a bridge constructed by the Hon. Member of Parliament as one of the bridges they constructed. According to the Member of Parliament, the Said Bridge (Njai Bridge) which the Bo City Council presented in their report as one the bridges they constructed was constructed by solely by him and he furthered that he has all documents to the effect. Hon. Tholley however expressed dissatisfaction over what he referred to as broad day light robbery by the Council.  (Photo: Bo City Council C.A. Victor Kalie Kamara, Finance Officer Abubakarr Kargbo and team)

The committee members in their response to the unfortunate incident ordered them to explain how they truly spent government’s money that was given to them for the development of the municipality adding that they will institute a further investigation into their activities.

Police Crack Down on Clique

King Kama Laid to Rest After A  We...