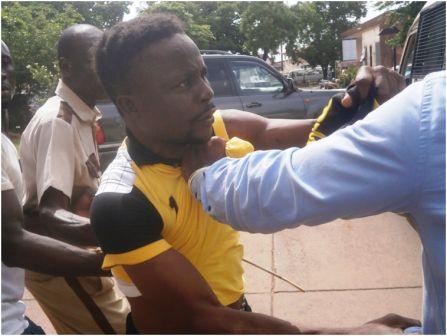 A man who refused to identify himself was recently caught stealing an expensive Techno mobile phone at Youyi Building, Brookfield’s in Freetown.  Thief was dragged by security men to the Youyi Building Police Post

Many people who rushed to the scene of incident said the thief was a resident of a den of notorious criminals called Granat Market where the current Susan’s Bay Community Health Centre, built by the UK International Non-Governmental Organization (INGO), Save the Children, is located.

The notorious thief who was caught red-handed was given a sound beating by the irate mob before he was handed over to the Youyi Building Police Post.

Meanwhile, the alleged mobile phone thief is helping the police with investigation.