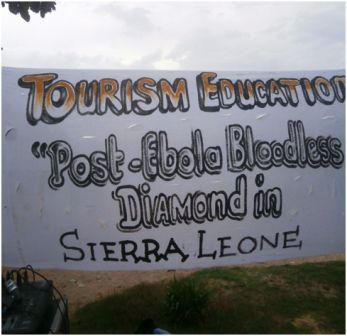 Total Ripsta Culture Group with support from the National Tourist Board (NTB) has embarked on a free live band campaign to heighten tourism education across the world on the theme “Post Ebola Bloodless Diamond in Sierra Leone”.

Speaking on the project concept last Friday 2nd June 2017 during a presentation of cultural performance and short skit at the Aberdeen Beach, Sierra Leone Music Ambassador to Europe, Obi Phrase said Sierra Leone story has positively changed from Blood Diamond to Bloodless Diamond because he said, as a nation we have gone through war and Ebola Virus Disease (EVD) scourge.

Mr. Phrase maintained that after the Ebola epidemic, the country extracted one of the biggest diamonds which is expected to benefit citizens in the entire country for the fact that the precious stone was found at a time the country is enjoying peace, democracy and have forgotten about war for close to two decades.

He disclosed the group plan to travel three European countries including, Finland, Estonia and Sweden to not only preach the peace and good name of the country but to also encourage foreign investors to come and do business in the country. The Music Ambassador emphasized that the 709 Carat Diamond is so clean in a way that it wouldn’t turn to a stone.

He recalled how President Koroma collected the Africa Peace Award 2009 in South Africa on behalf of the country and he described our democracy as clean for the fact that he said, we are now transferring power periodically from one leader to the other, an action he signifies that there is no more war in Sierra Leone.

Mr. Phrase said they are taking this concept at international level through the consent and supervision of President Koroma for the world to know that Sierra Leone has taken new direction.

The General Manager, National Tourist Board (NTB), Yassin Kargbo intimated that the manner in which Total Ripsta Culture Group organized themselves demonstrated that tourism sector has picked up and it will continue to fly higher like bird.

“We have all what it takes as a nation to grow more that Gambia,” he asserted and emphasized that President Koroma has placed tourism at the apex and supplement that war is over and the country is now moving forward towards modernization. He described the group as unique and it has strong connection in Finland with the motive of bringing back to the country. He assured that the Ministry of Tourism and Cultural Affairs will be represented in the journey to Europe and assured that as far as tourism is concerned, the group has the full support of NTB to achieve it desire. “Our country is sweeter than any other nation in the world,” Kargbo said and urged all citizens to put the country first.

The GM spoke on the important of beautifying Sierra Leone which he described as having natural beaches with hospitable people. He maintained that the country can now boasting of having modern hotels around the beach area that would accommodate all sort of tourists and investors that may visit the country.

The event was climaxed with cultural performances by various competent musical stars in the country including Manager of Total Records, Nathaniel Jones aka Fumes and wife Mariam, Salone Rasta King, Jahman who delivered a divine Rastafarian prayers, Osman Obai Kamara aka Obi Phrase, among others.

We Have No Reasons for Not Being a...