Yumkella declares Bio as next president 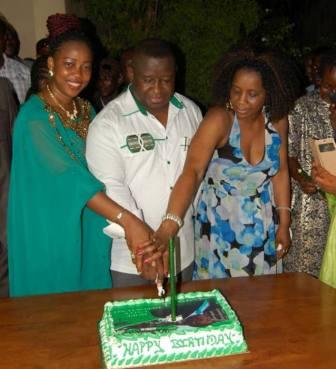 Yumkella declares Bio as next president

Dr. Kandeh Yumkella’s elder brother and former High Commissioner to The Gambia, Ambassador Foday Yumkella has declared Brigadier (Rtd.) Julius Maada Bio as the next President of the Republic of Sierra Leone. Ambassador Foday Yumkella made this public declaration during the 53rd birthday party celebration for the former Head of State at his Juba Hill residence on Friday 12th May 2017.
In a short statement which thrilled Party Stakeholders and members, the biological brother of Dr Kandeh Yumkella stated that he wanted to wish the next President (Brigadier Bio) of the Republic a happy birthday. “I will look forward probably next year when we will celebrate this birthday as the President of the Republic of Sierra Leone,” Ambassador Foday Yumkella declared.
The confident Ambassador Foday Yumkella who appeared very delighted with the declaration ended by saying that everybody would have got the message expected from Foday Yumkella. It was like a genuine recognition from a man who loves the SLPP and cares about the country knowing that SLPP and the country expect him to choose the most popular aspirant and not the unpopular aspirant even if the latter is his brother.
The latest endorsement of Brigadier Bio to be the next President by Ambassador Foday Yumkella is part of the overwhelming realisation within the SLPP that many senior Party Stakeholders are now uniting behind Bio as the most capable flagbearer aspirant to return the SLPP to governance in 2018. Also, the fact that Ambassador Foday Yumkella has publicly declared for Bio despite his younger brother being an aspirant, shows that Foday Yumkella has put the interest of SLPP coming to power above family interest.
Many SLPP members have also opined that unlike Dr Kandeh Yumkella, Ambassador Foday Yumkella has a track record of service and commitment to both SLPP and the country. During the previous SLPP Government of President Kabbah, Foday Yumkella served the country in various capacities as Sierra Leone’s High Commissioner to The Gambia, Minister of State for Presidential Affairs, Deputy Minister of Mineral Resources and Deputy Minister of Agriculture, Forestry and Environment.
Ambassador Foday Yumkella is also a highly respected stakeholder in the Party and many hold him in high esteem for his contributions to the SLPP spanning over decades leading to many electoral successes of the SLPP during national elections since the late 1990s. He is also highly regarded in Kambia District. It is conceivable that because of his wealth of experience both in national politics and governance, he has now publicly endorsed Brigadier Bio for Presidency as he is convinced that Bio will not only return the SLPP to governance in March 2018 but also that Bio will make a great President.
Since the declaration by Ambassador Foday Yumkella for Brigadier Bio to be the next President many political observers, commentators and independent voters have also praised Bio for his efforts to unify the SLPP by reaching out to fellow aspirants and even their family members to support his candidacy. Conversely, political observers, commentators and independent voters are now asking after this declaration: if Dr Kandeh Yumkella cannot unite his family members to support him, how can he unite the SLPP or the country behind him?
by Julius Maada Bio Media and Communications Team
Stay with Sierra Express Media, for your trusted place in news!