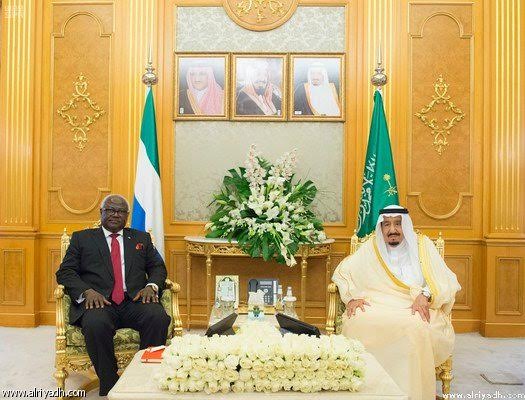 During the reign of Ambassador Sulaiman Baba Timbo, a state visit by His Excellency, Dr. Siaka Stevens to the Kingdom of Saudi Arabia was arranged. The visit took place in 1982. Stevens conferred with His Majesty, King Khaled Bin Abdulaziz Al Saud and the then Crown Prince, His Royal Highness, Fahad Bin Abdulaziz Al Saud (late) and the then Deputy Crown Prince, His Royal Highness, Abdullah Bin Abdulaziz Al Saud,(late) both of whom later became Kings and Custodians of the Holy Mosques in 1982 and 2005 successively. Stevens also met with some top officials of the Saudi Government at the time and discussed issues of concern to both countries. Speaking in a brief telephone interview last night, Ambassador Sulaiman Baba Timbo told me that, all the meetings Stevens had, were very successful.

A few months after his election as President of Sierra Leone, His Excellency, President Dr. Ahmed Tejan Kabbah (late) was scheduled for a state visit to Saudi Arabia. The euphoria in the Arab World for having the first Muslim President in Sierra Leone was highly felt. Thus, Saudi Arabia was all prepared to embrace President Kabbah and warmly welcome His Excellency to the land of the cradle of Islam. However, to the utter dismay of Saudi Arabia and some countries in the Arab World, perhaps due to misguided counseling, President Kabbah’s well-arranged visit to the Kingdom of Saudi Arabia was abruptly cancelled; a decision that tremendously shocked Saudi Arabia; and their shock grew even deeper, when they later realized that President Kabbah’s state visit to Saudi Arabia got basically cancelled in order to get it redirected to the Islamic Republic of Iran; a country deemed by Arabs as their arch rival in the Middle East in general and in the Gulf Region in particular.

President Kabbah’s cancelled state visit to Saudi Arabia at that crucial moment was viewed by the then Ambassador here in the Kingdom, Umaru Bond Wurie, who played a pivotal role in having the visit arranged and approved, as a missed opportunity. Wurie also told me in a telephone interview last night that, “Saudi Arabia and the Gulf States in general were ready to accommodate President Kabbah’s requests for his country and people unconditionally.”

Sierra Leone nationals in Saudi Arabia, I learned, were even more disappointed and embittered by the cancellation of President Kabbah’s state visit to the Kingdom for what they believed could have been a historic event that would have paid dividends for Sierra Leone in so many aspects. That visit, they maintained, would have given Sierra Leone access to the abundant facilities available in the Gulf States. For the Sierra Leoneans resident in the Arab world that cancelled visit was another confirmation of Sierra Leone’s naivety towards the Arab world and its ignorance of the numerous facilities Sierra Leone has failed to gain from Saudi Arabia since it established diplomatic relations with the Muslim Monarchy almost four decades ago.

His Excellency the President, Dr. Ernest Bai Koroma arrived in the Kingdom on the kind invitation of The Custodian of the Two Holy Mosques, King Salman bin Abdulaziz Al Saud, on May 7, 2017.
On arrival at the Royal Terminal of the King Abdul Aziz International Airport in Jeddah, the President was received by the Deputy Governor of Makkah Region, His Royal Highness Prince Abdallah bin Bandar bin Abdul Aziz Al Saud, the Minister of Culture and Information, Mr. Awwad Al Award, Saudi Arabia’s Ambassador to Guinea –Conakry with accreditation to Sierra Leone, His Excellency, Sulaiman Bin Salleh Al Freih, among other senior Saudi Government officials.

On the part of Saudi Arabia, the Custodian of the Holy Mosques, King Salaman Bin Abdulaziz, regarded President Koroma’s visit to his Kingdom as an opportunity to establish a strong partnership with His Excellency in a number of political arenas, prominent among them is the fight against terrorism and the Islamic Coalition Force fighting the outlawed regime in Yemen. Thus, the visit stands as a golden opportunity for both countries as far as their mutual interests are concerned.

It could be recalled that early this year, His Excellency President Dr. Ernest Bai Koroma paid an official visit to the People’s Republic of China to express sincere appreciation and gratitude to President Xi Jinping and the people of China for the support rendered to the Government and people of Sierra Leone during the outbreak of the Ebola Virus Disease (EVD). Many agreements aimed at advancing the country’s development aspirations through the ‘Agenda for Prosperity’ were also signed by counterpart ministers during the President’s Visit to China, especially in the health sector. It is against the same backdrop that President Koroma seized the opportunity to pay an official visit to the Kingdom of Saudi Arabia.

During his visit, the President held official talks with his Saudi counterpart, King Salman and also met with the Deputy Premier and Minister of Interior and Crown Prince, His Royal Highness, Mohammed bin Naif Bin Abdulaziz. His Excellency the President also held marginal meetings with the President of the Islamic Development Bank (IDB), His Excellency Dr. Bandar Bin Mohammed Bin Hamza Asaad Al Hajjar, the Secretary-General of the Organization of Islamic Cooperation (OIC), Dr. Yousef Bin Ahmed Al-Othaimeen, the Director-General for the Saudi Fund for Development (SFD), among others.

The meetings centered on a wide range of issues, including the further strengthening of Sierra Leone’s diplomatic relations with the Kingdom of Saudi Arabia in the areas of trade, economic cooperation, and issues of regional and global peace and security. Before the President left for Turkey, Saudi Arabia pledged to support Sierra Leone in the areas of health, roads infrastructure, communications, water and a host of other development projects, including the annual pilgrimage to Mecca by Sierra Leone Muslims.

Why is Saudi the hub of the Arab world?

It is worthy to note that Saudi Arabia is the hub of the Arab world in a number of domains due to the following:

Based on the above factors and others, Saudi Arabia stands as one of the most strategic countries in the world. U.S President Donald Trump’s planned visit to the Kingdom next week, as one of the first countries to visit since he was inaugurated in January this year; also explains how strategic Saudi Arabia is. Thus, His Excellency, President Dr. Ernest Bai Koroma’s recent visit to Saudi Arabia bears a great deal of significance. Taking advantage of the current cordial bilateral relations between Freetown and Riyadh, Sierra Leone stands to make strategic and economic gains in a number of sectors – such as: Investment opportunities, Agriculture, Health, Education, Tourism, Aviation, Information Technology (IT), among other vital areas.

It is important to note that, when it comes to rating gains made by African countries from the Arab World in general, Sierra Leone is rated as the country that has gained the least from the Arab World in the past four decades since it established diplomatic relations with Saudi Arabia in the late 70’s. Sister countries like: Nigeria, Senegal, The Gambia, Guinea, Burkina Faso, Mali, to name just a few, have made enormous gains from Saudi in particular and the Gulf States in general through strategic planning.

Thus, now is the time Sierra Leone should change its view and decades-long held misconceptions towards the Arab world as primitive and ‘bedwin’ countries. In the past four to five decades, Arab countries, especially the Gulf States such as: The Kingdom of Saudi Arabia, The United Arab Emirates ( The UAE), The State of Kuwait, Qatar, Oman and Bahrain have made giant strides in a number of domains such as : Health, Education, Infrastructure , Information Technology, Aviation, Business, and other sectors of vital importance. Anyone who has been to Saudi Arabia, (whether for Hajj, Umrah, or Business), must have witnessed the rapid development of the country in so many aspects. Sierra Leone, therefore, should by all means endeavor to have or create long-term strategic partnership with Saudi Arabia which will pay dividends in the future, and which will open untapped shores to Sierra Leoneans.

Having said all the above, it would be unfair to conclude this article without mentioning the Unknown Soldier who was the catalyst behind the realization of President Ernest Bai Koroma’s state visit to Sierra Leone and whatever gains His Excellency might have made from this visit.  That Unknown Soldier is no less a person than Present Koroma’s Envoy to Saudi Arabia, Ambassador Alhaji Mohamed Sillah Kargbo. Since his appointment to this Muslim Monarchy in March 2014, Ambassador M.S. Kargbo has left no stone unturned in his mission to ensure that Sierra Leone’s diplomatic and bilateral relations grow not only stronger but closer as well; and His Excellency, President Koroma’s recent state visit to Saudi Arabia has emphatically buttressed the Ambassador’s efforts in that direction. Thus, Ambassador M.S. Kargbo and his STAFF deserve a big accolade for this colossal achievement. M.S Kargbo has indeed manifested his credentials as an envoy determined to create many windows of opportunity for Sierra Leone in this strategic region.