Homepages
Your trusted place for Sierra Leone and global news
Trending News
HomeEditorialFrom Where Are The Guns? 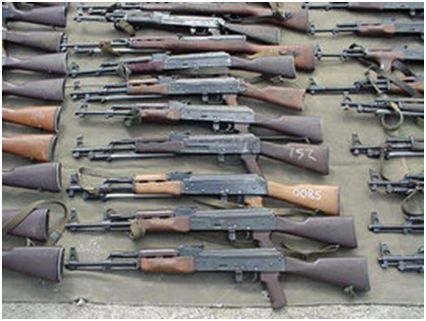 Armed robbery now seems to have become the order of the day in Sierra Leone and what has made us more worried is the daring manner in which it is now perpetrated.

Wednesday broad daylight armed robbery attack at Mercury sub-office in Wellington has left this press extremely worried over the state of security in this republic.

While hailing the Police for their prompt intervention which resulted into the deaths of the robbers, we continue to be mystified by the question of where the guns used by the armed robbers are coming from.

We believe this is a very serious issue that the Sierra Leone Police must try to investigate to know who and who are giving guns to these armed robbers who keep unleashing mayhem on peaceful citizens.

We are yet to see gun shops in the country. So, who is arming the robbers with automatic rifles which are only supposed to be in the possessing of our OSD and Military forces?

We have witnessed a case an OSD officer, Daniel George, who was arrested and detained in Pujehun on allegation that he conspired with armed robbers to rob and terrorize people in Pujehun.

The arrest of the OSD officer came amid widespread and long standing speculation that our armed OSD officers were involved in the rampant armed robbery now endangering our fragile peace.

But we cannot use the isolated arrest of the OSD officer in Pujehun to generalize that our Police are arming the armed robbers as there are bad eggs in any institution.

But to save them from much suspicion, we are advising the Police to mount a rigorous investigation to ascertain the source of the rifles which the armed robbers keep using to cause atrocities in the country.

We are very much aware that guns are tightly regulated in this country which has gone through a decade-long savage rebel war.

In conclusion, this medium is on bended knees pleading with our police officers to continue their good work of fiercely resisting armed robbers as they did in Wellington past Wednesday.