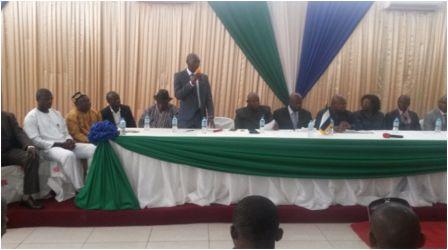 The Ministry of Mines and Mineral Resources, in collaboration with the National Minerals Agency (NMA) on Thursday, 11th May 2017, rejected five bidders for Sierra Leone’s second biggest diamond weighing 709.41 carats.

Addressing bidders at the bid opening ceremony at the Bank Complex in Kingtom, Freetown, the Director of National Minerals Agency (NMA), Sahr Wonday, expressed regret over the fact that all five bidders did not meet government’s expected price for the diamond.

The five bidders, according to Wonday, are

The NMA Director-General revealed that each bidder paid five thousand US Dollars obtain the bidding forms and fifty million Leones as bid security.

In his statement, Deputy Minister of Mines and Mineral Resources, Abdul Koroma, described the event as historic in the country’s minerals sector, adding that Sierra Leone has long history of mining dating back since 1930s during which thousands of diamonds of various sizes, shapes and colors have been found and exported out of the country.

He noted that this is the first time such a big diamond has been openly put on national and international tender, a glaring manifestation of the transparency and accountability that now characterize the mining sector.

The Minister recalled that the uncut diamond weighing 709.41 carats was found by Pastor Emmanuel Momoh in Koryardu Village, Tankoro Chiefdom in the eastern Kono District on 14th March, 2017.

He said on 15th March, 2017, both Pastor Momoh and Paramount Chief Paul Sahr Quee of Tankoro Chiefdom presented the diamond to the President, His Excellency Dr. Ernest Bai Koroma and the Minister of Mines and Minerals Resources, Hon. Alhaji Minkailu Mansaray and the technical team at the NMA tested the stone and confirmed that it was, indeed, a diamond.

He noted that the NMA also weighed the diamond in the presence of Pastor Momoh and PC Saquee.

The Minister went on to say that based on many mysterious stories surrounding previous diamonds of such magnitude His Excellency the President, Dr. Ernest Bai Koroma instructed that the sale of the diamond be transparent.

In an exclusive interview, Pastor Momoh, who discovered the diamond, thanked government for rejecting the bidders, expressing conviction that the diamond will cost over $50 million.