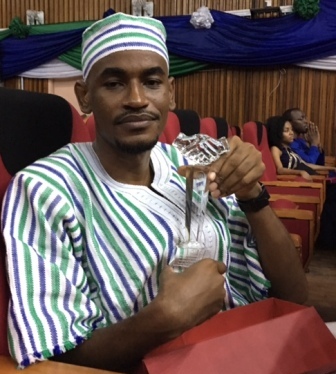 Founder and CEO of Sierra Leone’s foremost Arts and entertainment newspaper, SaloneJamboree, has appealed for more support for young people in the country.  (Photo: Murtala poses with his award)

Murtala Mohamed Kamara said during his acceptance speech as one of the 50 Most Influential Young Sierra Leoneans that there are many young Sierra Leoneans outside that number with huge potentials but they lack the opportunities to grow. He therefore called on the Government and the private sector to create the enabling environment for these young people to succeed.

Kamara was named among recipient of the maiden edition of the annual award which seeks to recognize the contribution of young people in national development. The 50 recipients were drawn from different fields of work. The event took place on the 25th April at the Miatta Conference center.

The citation of the award reads: “The Institute of Leadership, Entrepreneurship and Development (ILEAD ) have selected you as one of the 50 MOST INFLUENTIAL YOUNG SIERRA LEONEANS IN 2017 based on your proven ideas, evidence and the impact your leadership has influenced in the development of Sierra Leone as a mentor and young leader in your field and social activities that transforms the lives of Sierra Leoneans, inspire generational thinking and community problem solving.”

Kamara, who dedicated the award to his mother, his wife and two children and to the young people of Sierra Leone, said he feels humbled to be among the recipients.

Kamara is a young Sierra Leonean journalist, entrepreneur, rights activist, philanthropist, and a father. He is also Sierra Leone’s correspondent for German international broadcaster Deutsche Welle. He is a Global Shaper and was named in 2017 among the 100 Most Influential Young Africans by the Africa Youth Award (www.africayouthawards.org/100-influential-young-africans/ )

You can find him online at www.murtalamohamed.net