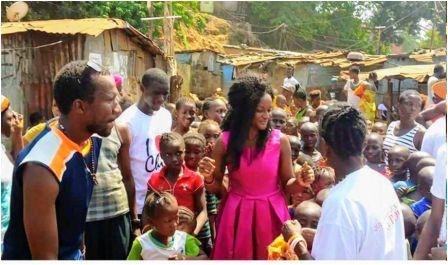 Sierra Leonean born painter, cultural artist and fashion designer, Ada Yang who is married to a world renowned Chinese painter and cultural artist is holding an annual Networking Event and Painting Exhibition in the United States of America.

The event will take place at the Game Baltimore, 1400 Warner Street, Baltimore, Maryland on 13th May 2017.

The strictly formal dress code event stars at 6PM and runs until 9PM. Neneh Ada Yang, maiden surname Koroma is the founder of Queennak Foundation which engages in charity work among the poor in her native Sierra Leone. During the Ebola outbreak in the country between 2014 and 2015, her foundation raised tens of thousands of dollars and relief materials that were distributed among victims.

Ada Yang is an accomplished painter in her own right who annually hosts in China the Du Yi International Arts and Cutural Festival.

“I’m very proud that I might be the only African that can paint Chinese,” she says with a smile, sitting in her Beijing art studio surrounded by paintings of trees, flowers and towering mountains.

Ada who could not speak any Chinese when she arrived in China in 2011, is now skilled in several traditional Chinese art forms, including Peking opera, calligraphy and playing the seven-stringed guqin.

Her specialty is in traditional Chinese painting, which is distinguished from Western art in that it uses xuan paper, a high-quality paper made for painting and calligraphy, or silk, with a special brush, ink and paint made from mineral and vegetable pigments. Her work which incorporates African and Chinese art forms has been successful enough for some to be exhibited in the National Museum of China.

Ada Yang who exhibited her works in her native Sierra Leone at Bintumani Hotel in Freetown on Friday 20th December 2013 said God created mankind in his own image and likeness. Therefore there is need for the existence of love among human beings devoid of ethnic origin or nationality. She explained that she hailed from a poor but humble family, adding that this is one of the reasons why she frowns at extreme dislike among Sierra Leoneans. She thanked God for seeing her through all the crucibles of life.

Recently she won a contest organized in Beijing on Chinese New Year’s Day. Ada Yang was crowned as the most popular Africa female celebrity of the year 2016. The awards came after a huge two days celebration of the Du Yi International Festival at the China World Trade Center Building. Thousands of Chinese and other nationals graced the occasion on the Chinese New Year Day.

A versatile multimedia personality, ‘Rolling with the Naks’ is a new Chinese TV talk show program hosted by Ada Yang.

A young woman of many interesting parts with a classy international outlook, Ada Yang is also a fashion designer with her own unique line of quality African, Asian, Europen and American clothing and accessories for ladies and gents called Queennak Luxury. The label also features clothing by well known international brand names such as Armni, D7G, Versace, LV, Jordan and more.

In line with her above business interest, Ada Yang also has in her business portfolio the Queennak Modeling Agency.

And  studied Business Management at the Emibex College in Freetown remains true to her roots. In Sierra Leone, she has over the years donated generously to many humanitarian causes to children living in deprived urban communities.

Ada Yang’s greatest dream for the children of her country is to build an orphanage in the capital city of Freetown.