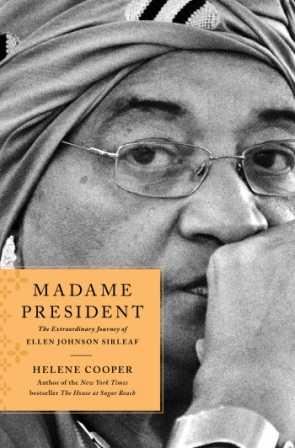 Helene Cooper’s fascinating new book, Madame President, made me think of my friend, the global girl rights advocate Chernor Bah (Ceebah). Chernor recently waged a vigorous campaign calling on the government of Sierra Leone to overturn what he called “an unfair and unsound” ban against pregnant girls from attending school. Thousands of girls had become pregnant during the Ebola crisis that recently devastated Sierra Leone, Liberia and Guinea and as schools were reopening, the government of Sierra Leone announced that pregnant girls should stay home. Chernor’s argument was that, apart from the injustice of banning victims of the Ebola epidemic from school, pregnancy was not a disease and that these girls had the right to remain in school and could still achieve their fullest potentials. He should probably have just bought Madam President for the officials in Sierra Leone- who unfortunately stuck to their position and refused to let pregnant girls attend school.

They would have met a certain female, Baby Ellen, nicknamed Red Pumpkin who, at the age of 17, had her first child and by the time she was 24, she had added three more kids. Still, she did not drop out of school. Rather, she had an insatiable appetite for a better education.

Unlike those girls who were denied the chance to return and complete their exams during the Ebola epidemic, Madame President reveals Ellen’s motivation may have been derived from a prophesy by a man who once visited their Benson Street residence in the Liberian capital, Monrovia and announced that this child (Baby Ellen) would be great.

Helene Cooper is Pulitzer-Prize winning journalist and a native Liberian who expresses her fascination with Baby Ellen’s childhood story. Ms. Cooper situates Madame President within Liberia’s historical context particularly of the 80s. It is the story of a determined woman who got married at 17, and like many women in Africa, suffered domestic abuse but battled through the vicissitudes of life to become Africa’s first democratically elected female President – the 24th President of the Republic of Liberia.

Ms. Cooper took a break from covering Barack Obama’s momentous presidency to chronicle what she described as a democratic coup orchestrated by women, many of them uneducated. The author once made Air Force One her thoroughfare, reporting on the activities of US Presidents and Secretaries of State. This time, her focus was on the woman Liberians call the O’l Ma. President Johnson- Sirleaf first ascended to power in 2006, after a run-off election against internationally renowned soccer star, George Weah in November 2005.

Madame President is the extraordinary journey of Ellen Johnson Sirleaf interwoven into a historical narration of how freed slaves from the Americas were sent back to Africa to be resettled in countries such as Sierra Leone, Nigeria and Liberia. In Sierra Leone, the Nova Scotians were transported from England in 1787 to form the Crown Colony in 1808. The Maroons and the Liberated Africans later followed. In Nigeria, the Saros or Creoles (freed slaves) migrated to that country in the beginning of the 1830s and in Liberia, the first set of freed slaves arrived in 1822.

In Madame President, Ms. Cooper documents in detail President Johnson-Sirleaf’s childhood adversities: the President defied the odds to secure higher education on foreign soil, returned to her country only to be jailed, became a refugee following a devastating civil war and finally was elected to the Presidency after defeating a crowded presidential field dominated by men.

I witnessed President Johnson-Sirleaf’s inauguration on January 16, 2006. Standing in front of a Liberian flag with her left hand on the bible and her now trademark head-tie, the 67-year-old pledged to execute the functions of the office of the president. I also met her on a few occasions, including in 2007 at a dinner she hosted in honor of Ms. Zainab Bangura who had just been appointed Sierra Leone’s Foreign Minister.

The President was also heavily involved in the UN outreach activities, particularly the A Star is Born singing competition which I helped to organize. At several finals, she would get on stage and sing to the excitement of a jubilant audience.

Madame President may not have captured such details of the President’s interactions with the public but the book nonetheless portrays her as an astute politician without being overtly effusive in praise.

Readers will have to debate and judge whether it is appropriate for the author to provide what appears to be ‘too much information’ on Ellen’s personal life. For example, she writes that when James “Doc” Sirleaf, her husband became abusive, Ms. Johnson-Sirleaf found comfort in the arms of a Chris Maxwell, a guy she had met at a party.  Because the President was married at the time, that story hints at infidelity- an issue that is likely to be considered a recurring theme throughout the book. When Maxwel died, Ellen’s own words were read as a Eulogy at the funeral.

Madame President portrays Ms. Johnson-Sirleaf as ambitious, who, from an early age, had her sight set on the presidency. She initially supported Charles Taylor’s rebellion. Both had met at a restaurant in a Paris Hotel she was staying. Later, she helped to raise funds to prosecute the war against then President Samuel K Doe. She also made a daring visit to Mr. Taylor in the jungle and on BBC, she once said that if the Executive Mansion was to be destroyed during Taylor’s threat to invade Monrovia, it will be rebuilt. Many Liberians interpreted that statement as insensitive as well as one of the hallmarks of thirst for political power.

Making sometimes very difficult decisions is another recurring theme in Madame President. On several occasions, the President left her children with her mum and other relatives while she travelled abroad to study. She did the same when she resigned her job with the World Bank. She parted ways with her husband having suffered abuse, left her plush jobs in the US to return and contribute to Liberia’s development, once acted against the will of her relatives to contest for the Presidency and controversially worked with Samuel Doe who had just overthrown a government in which she was the Minister of Finance and had executed some of her colleagues. She once refused to take up a Senate seat that she had clearly won.

The core message in Madame President is that, a lifetime of travails was rewarded with the ultimate prize- the presidency!

The author also echoes some of President Johnson -Sirleaf ’s challenges, including her efforts to get the market women off the streets, which was vigorously resisted. Challenges also include acute lack of jobs for the unemployed youth and having to deal with the recommendations of the Truth and Reconciliation Commission, many of which did not flatter her. She has been accused of nepotism and her inability to tackle corruption, among others.  Ms. Cooper writes: “Next up on the list of Mesdames’ early-and -prevailing problems was corruption, an issue that would bedevil her for years to come.”

Madame President is engaging and riveting, and the language is accessible. It will likely be a historical resource, providing a window into the extraordinary life of one of Africa’s top leaders, and through her, a better appreciation of Liberia’s sociopolitical story.

Before making any judgment on the life and politics of President Johnson-Sirleaf, it is advisable to read Ms. Cooper’s Madame President.

About the author: Osman Benk Sankoh is a Public Information Officer with the United Nations. He was previously the Editor of Concord Times, one of Sierra Leone’s leading national newspapers. Sankoh has reported and written extensively on peace, conflict, politics and social issues in Liberia and Sierra Leone.

My Personal Tribute On The Late Am...