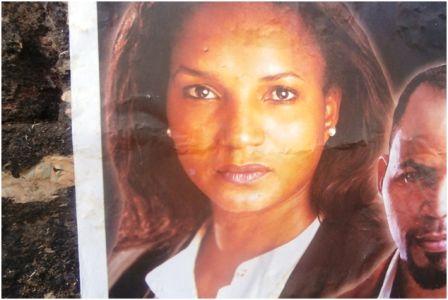 Dija Kay as she is commonly called is a flaxen in complexion and slim lady with long faire-haired joined the Vine Memorial Senior Secondary School, Congo Cross in Freetown after securing distinction in the Basic Education Certificate Examination (BECE) at BISS in 2001.

Most interestingly, after going through her senior secondary school education, Dija Kay pursued tertiary learning and soon graduated in one of the Business Management faculties. Consequently, the beautiful female actress started working for Comium Mobile Company where she reported to have enjoyed good working relationship with management but her good looks which have attracted the movie industry did not allowed her. Dija Kay has been featured in many outstanding films and she has proven her character as a born talented actress in many ways.

Because she has excelled in the film industry to international level, Dija Kay is now acting with legendary that have made big names in performing  art including the recent Salone film titled “Elephant in the room”, a movie stared Nigerian famous actors, Ramsey Noah, Zainab Sheriff, Dija Kay and others.

Dija Kay is considered as a born actress because she involved in the art since her primary school days as she was actively participating in among other things drama, music miming, stage performances and dancing competition. Kadija Koroma as a young movie star is anticipated to do more in promoting the lost culture of Sierra Leone at globally level through performing arts.

‘The Company’: Sierra Leone’s most...