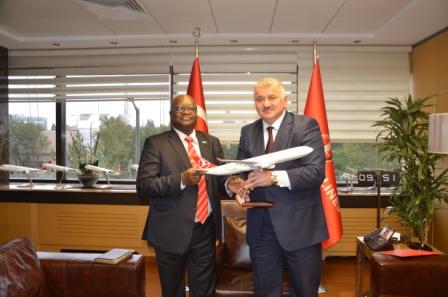 The Deputy Chairman and CEO of Turkish Airlines has said that the company is evaluating commencement of flights between Istanbul Ataturk and Lungi International Airports.  (Photo: CEO of Turkish Air handing over a gift to Amb. Timbo)

Speaking in the presence of the airlines Director of International Relations and Director of Sales for Africa, the CEO told the Ambassador that: “The Management of Turkish Airlines is conducting an evaluation to commence operations in Sierra Leone either via Abidjan, Accra or Conakry.”

Management, the CEO said, noted their Government’s advice a couple of months ago, encouraging them to commence operations to Sierra Leone and they felt good that the Open Skies Agreement between the two countries had been signed about five years ago.

Mr. Eksi also said they had started discussions with the Sierra Leone National Hajj Coordinating Committee to airlift this year’s pilgrims from Lungi International Airport to the Kingdom of Saudi Arabia at a very reasonable offer.

Responding, the Ambassador thanked them on behalf of the Government and People of Sierra Leone for considering Sierra Leone as one of their global destinations. The Ambassador also thanked the Turkish Government for encouraging Turkish Airlines to commence operations to Sierra Leone. The Envoy welcomed the move by the Management and noted that, the commencement of Turkey’s flag carrier to Sierra Leone will not only strengthen the long standing and excellent bilateral relations between the two countries, but it will also boost trade relations between the two friendly countries.

Ambassador Timbo noted that his meeting with the Management of Turkish Airlines is another clear indication of the unequivocal willingness of Ankara to improve its relations with Freetown in a variety of domains which will be of huge benefits to both countries in the long run.Both officials concluded that having Turkish Airways commuting between Istanbul and Freetown would be a crucial turning point in the history of the bilateral and diplomatic relations of the two countries, and it would also definitely add more flavours to the increasingly growing amicable atmosphere accentuated by the recent visit of Sierra Leone’s non-resident Envoy to Turkey.

Reacting to the news, a Sierra Leonean pursuing PhD in Geodesy and Photogrammetric at the Ondokuz Mayis University in Turkey says Sierra Leonenans in Turkey will be the happiest the day Turkish Airlines touches the tarmac of the Lungi International Airport.

Abu Kamara says the Ambassador’s move is an indication of opening the country to the outside world. “This is the kind of initiative and dynamism Sierra Leoneans expect from their leaders,” Kamara told me on the phone from the Turkish black sea region of Samsun.

The airline increased its total number of passengers by 2.5 percent year-on-year to reach 62.8 million last year, according to a stock exchange filing report revealed in January this year.

Turkish Airlines is one of the most preferred leading European air carriers known for its safety, reliability, and service quality. Turkish Airlines, a Star Alliance member, is also a four star airline with a fleet of over 300 aircraft flying to over 295 destinations around the world, more than any other airline, according to the company.

It was named “Best Airline in Europe” at the 2016 Skytrax World Airline Awards. This was the sixth year in a row that the global airline has been awarded this prestigious award based on the votes of the traveling public.