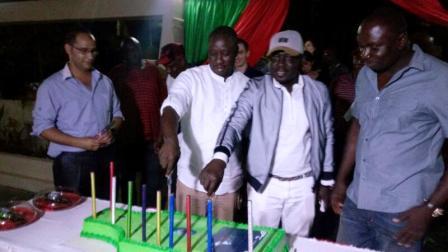 In a bid to develop the tourist industry in Sierra Leone, Heineken and Sierra Leone Brewery Limited  (SLBL) in partnership with Sierra Leonean entrepreneur (232 Complex), on Saturday 8th April 2017 officially opened the 232 Complex along the country’s most popular beach at Aberdeen/Lumley. This complex is housed in the former Alafia Point entertainment centre.

Speaking at the opening ceremony, Minister of Tourism, Sidi Yayah Tunis, expressed satisfaction over the initiative taken by both patriotic Sierra Leoneans and the executive of SLBL to transform this idea  into reality. He praised the initiative as being in line with the development goal of the Tourist Ministry and also with the president’s agenda for prosperity. Commenting on the name of the complex Yayah Tunis said that to showcase the Sierra Leonean factor of the project, the name depicts the international code of the country which is code 232.  He praised the complex as being in an atmosphere of serenity and beauty which is heightened by its unique location along the beach facing the Atlantic Ocean. This he said is an ideal place for tourists. He expressed satisfaction over the employment of so many Sierra Leoneans in its work force; counting himself as “a very lucky young man” to have participated in the opening of this complex under his watch. He recognised the contributions of Heineken and SLBL to the completion of this complex.

Managing Director of SLBL, Darf Van Tilburg said that this showcases Brewery’s commitment to partner with Sierra Leonean entrepreneur for the growth and development of the country. The project is inspired by their vision to present an opportunity for all consumers to enjoy the products of the Sierra Leone Brewery. Speaking on behalf of SLBL, Marketing Manager Desmond George, said that this complex is to showcase how Sierra Leonean are and what Sierra Leoneans can do. To show case that, they are on top they have posted the world’s top premium international lager ‘Heineken.’ SLBL, he maintained does not only sell alcohol but rather sell leisure pleasure and entertainment. He thanked the government for providing a level playing field for all to operate. He also disclosed that a brand of drink ‘climax’ an energy drink will also be available together with their other products at this complex.

SLBL’s Brand Manager, Mrs. Aminata Carew expressed her appreciation to God and the government of Sierra Leone for providing the level playing field for SLBL and local industries in Sierra Leone. They are proud to be a part of this development. She intimated that this whole project did not start today but has been in the making for the past 6 months to 1 year. She praised the Sierra Leone Brewery’s Management for their dedication to invest and grow with Sierra Leone as they have been in this country for 54 years now and hopefully will be here for a much longer time to come. She then introduced those who had been working behind the scenes to make this project a reality.

On behalf of the 232 Complex, Tariq Rahme and Derrick Davies expressed appreciation to all guest for gracing the occassion and gave brief history about the complex. It was disclosed that all the materials used to do the complex are from Sierra Leone and done by Sierra Leoneans. The 232 Complex has a Lounge, Bar, Club, Restaurant and Conference Hall.

This auspicious occasion was chaired by John Konteh, and several distinguished personalities including the Minister of Information Mohamed Bangura, Sanusi Bruski etc. who graced the occasion. The event was climaxed by a musical performance by Lady Mackie. Cutting of the tape by both ministers present at the ceremony officially opened the complex. Food and drinks followed.