It’s time for young people to get political 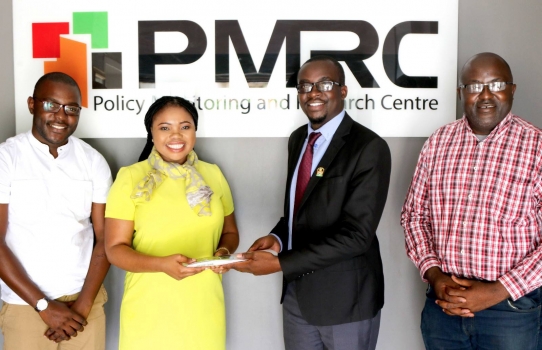 It’s time for young people to get political

Zambia’s youngest mayor urges youth to get active in politics

For many young people in Africa, a university degree opens the door to a decent job and a comfortable life. At university, however, not every student will focus on their studies; some often lose concentration as they enjoy a new-found freedom from what they perceive as the overbearing influence of parents or guardians.  (Photo: The Mayor of Kitwe, Mr Christopher Kang’ombe, who is also the president of the Local Government Association of Zambia, paying a courtesy call on Policy Monitoring & Research Centre Executive Director Bernadette Deka and her research team in February 2017. Photo: Christopher Kang’ombe)

For Christopher Kang’ombe, a desire to improve the students’ welfare led him to compete for a leadership position at the Copperbelt University in Kitwe, the second largest university in Zambia. He wanted to improve poor and inadequate accommodation on campus and expedite the release of bursaries.

It was a dream come true when he won elections to become president of the student union in 2006. That same year, at 21 and while still studying for his mechanical engineering degree, Mr. Kang’ombe ran and won national elections as a local government councillor for Riverside Ward, Kwacha Constituency of Kitwe, which includes the university town of Kitwe. He became the first university student to be elected a councillor in Zambia.

Not surprisingly, his political ascendancy met stiff opposition from those who questioned his experience and maturity. When he contested as a councillor, opponents argued that a student should be busy studying, not engaging in politics.

“When I was distributing my campaign fliers, some people told me that they would not vote for me because I should be focusing on earning my engineering degree and not pursuing political office,” Mr. Kang’ombe told Africa Renewal.

He won anyway and five years later, in 2011, he was re-elected. In his campaign, he promised to increase economic opportunities, improve infrastructure, particularly roads and the provision of street lights.

Just last September, Mr. Kang’ombe was elected as Kitwe’s first executive mayor under a new local government structure. For just being able to canvass for votes and win a competitive mayoral position, he cemented his reputation as an astute young politician and his party thereafter nominated him for president of the Local Government Association of Zambia.

Before the election, he had played a crucial role in convincing the central government to construct a bridge in his area to link it to a nearby farming community.

Now 32 years old, Mr. Kang’ombe heads the country’s association of local governments, which comprises all city and town councils in the country. His effective leadership skills are anchored in his ability to understand people’s problems and articulate solutions. For example, when the city was overwhelmed with street vendors displaying their wares in the streets, he helped convince them to move to designated trading areas, averting incessant police arrests. As a student union leader, he encouraged the university authorities to expand their range of courses, especially in the schools of business and forestry.

Navigating Zambia’s highly charged political atmosphere is something that Mr. Kang’ombe appears to have mastered. In Zambia, as in many African countries, partisan politics can sometimes involve personal attacks and mudslinging. His 2013 memoir titled “Students Reclaim a Place in Society” powerfully encapsulates a message of the leadership role of the youth in society. The foreword to the book was written by Zambia’s former president, the late Michael Sata, who bemoaned the limited role students were playing in national development.

On how he goes about his duties, Mr. Kang’ombe says: “I make sure I am accessible to people of the city and as such my schedule is designed so that every afternoon of every working day is dedicated to meeting citizens who wish to see me on any issue that they need addressed.” It is this novel leadership style that has earned him bipartisan support.

The primary role of local councils is to provide basic services for the under privileged, he says. Mr. Kang’ombe has identified proper land allocation, among others, as a priority area. “Proper allocation of affordable land to citizens is critical and my team will endeavour to achieve this.” Citizens usually criticize the  current land allocation system in which land advertised for sale is corruptly sold to rich and powerful individuals.

A key factor about youth leadership is that youth issues also become a priority. For example, Mr. Kang’ombe wants to ensure the revival of recreational facilities and establishment of new ones for youths. He is also organizing young people into small cooperatives for easy access to financing for business.

As head of Zambia’s local government association, the young mayor will have an opportunity to engage with colleagues in other countries under the aegis of the United Cities of Local Governments of Africa (UCLGA). The association meets regularly to devise solutions to development issues in Africa, such as how to mitigate the effects of climate change and promote efficiency in local governments.

Married with two children, Mr. Kang’ombe attributes his achievements to life’s lessons learned during his formative years at the university. He learned that beyond acquiring a certificate, concepts taught in class could be applied in everyday life. He also developed an appreciation of the role that public service can play in improving people’s lives.

His message to other youths is: “Now is our time as young people to achieve and if there is anything that fellow young people can learn from my experience, it is that anything is possible.”

If Voting Changed Anything, They’d...