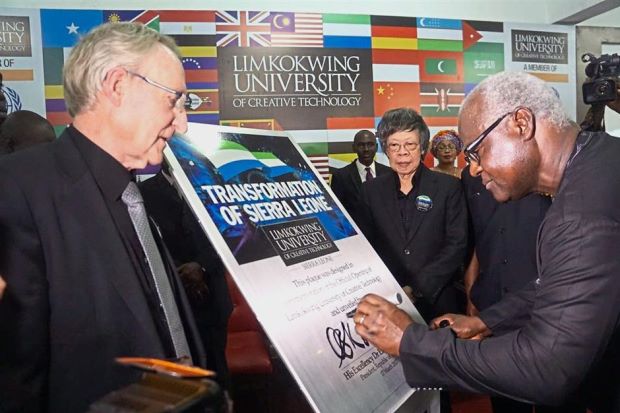 He said that by 2025, the vision of Sierra Leone is to have a potential, efficient and hardworking human resource department which would take precedence in the health, water, scientific, agriculture and other areas.

He went on to say that Sierra Leone has made significant strides in education, citing the recent developmental strides made by the current APC government to boost education in all corners of the country.

According to him, he is confident that the Limkokwing University of Creative Technology will add the necessary flavor needed to make education grow further in the country. He said his government has as its priority the development of universities across the country and has also created a number of new universities. His speech was greeted with loud applause.

In his short address, Minister of Education, Dr. Minkailu Bah stated that he is happy over the establishment of Limkokwing University of Creative Technology, adding that he is also confident that Limkokwing University of Creative Technology would add to the standard of education in the country. He mentioned that among President Koroma’s priorities, education takes a very important place. He said that over the years, the country has evolved to the extent that there are now several universities dotting the landscape and that the APC government intends to do more for education in the coming years.

Addressing his large audience which was composed of guests, diplomats, Education Ministry officials, students, parents and the press, the President of Limkokwing University of Creative Technology, HE Tan Sri Dato’ Sri Paduka Dr. Limkokwing, founder and president, maintained that at Limkokwing, every student will use latest technology to create content. She said that at Limkokwing, every student will understand the value of leading a healthy life, adding that students would also have access to an electronic library to conduct research on a global scale.

“I feel that responsibility to guide you through the next few years to become that corps of highly skilled, digital warriors who will speed to fulfill the President’s vision to move this country to middle income status,” HE Tan Sri Dato’ Sri Paduka Dr. Limkokwing said.

He added that the university’s primary objective in Sierra Leone is to assist in the social, economic transformation of the country. He said: “You will be the new generation of tech-savvy movers and shakers. You will be designing and building Sierra Leone’s future,” he told the students.

He further said: “Soon, you will be able to surf the web with just the power of your thought without the use of a keyboard. Soon the physical computer may no longer exist. Soon cars will be designed to enable the blind to drive and soon enough, classrooms will be replaced by smart-phones.

He thanked President Koroma and the APC government for providing the enabling environment for the Limkokwing University to operate and thrive.

A speech was also made by the Vice Chancellor, Prof. Cedric Bell. Appreciation speeches were made by students whose representative was Phebian Swill and Mohamed Michael Sesay.

Phebian Swill told her audience that she thanks President Koroma and the Government of Sierra Leone for embracing strategic partnership which has afforded the youth of this country to have a platform to build a bright and prosperous country.

She also thanked the Sierra Leone Campus Administration and especially the lecturers for their unflinching commitment and total dedication and also extended thanks to her colleague young professionals. She said: “Let us all continue the hard work to realize the Limkokwing Dream to ‘be the best’.

A video titled: ‘From Vision to Transformation’ was played. A tour of the university was conducted by the administration. HE President Koroma accompanied by Vice President Victor Bockarie Foh and entourage took part in the tour.