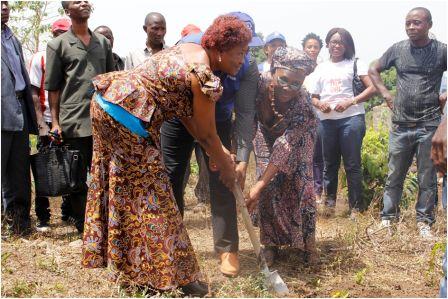 The Country Director of Plan International Sierra Leone, Mr. Casely Ato Coleman has on the 9th of March 2017 cut the sod for the construction of a community managed child-friendly learning center in Kolisokoh community in the Bombali district.

In his opening statement, the ward councillor Mr. Gibril Conteh who doubles as the chairman of the occasion thanked Plan International for bringing such initiatives into his ward which would help to facilitate Early Childhood Development for many children in the Kolisokoh community. Early Childhood Development he said is the foundation for onward learning for children.

Giving an overview of the project, the project Manager Madam Ramatu Kargbo highlighted the objective of the project which she said is mainly to enhance children’s rights to education, play and participation. This she said were fundamental human rights for all children including those of Kolisokoh community. The center will form a transition for children between ages 3-6 years into primary school. The center is in addition to the two primary schools that Plan International had already constructed in the community for better and quality education for children especially girls who are mostly marginalised in communities.

She called on all community stakeholders and members to ensure proper ownership and management of the center.

In her statement, the Assistant Director North at the Ministry of Social Welfare Gender and Children’s Affairs-Mrs. Josephine P. Saccoh highlighted numerous areas of support that Plan International had provided in the past for the development and protection of children across the district. She called on the community to embrace this opportunity and provide the enabling environment for children to access and learn at the child-friendly learning center in order to enhance their proper growth and development.

The Deputy Director of Education Bombali district -Mrs. Agnes Nkanku Kamara also expressed her appreciation to Plan International for working so hard in improving educational outcomes for children within the district. She noted that there is hardly any part of the district where one cannot find the hallmark of Plan International in the area of education. She admonished parents to provide the necessary guidance and monitoring for their children at the centre as children are able to learn many things at nursery. Parents she said must be role models to their children in every facet of life. She ended by encouraging teachers to provide the necessary space for children to learn at the center.

The Country Director of Plan International Sierra Leone Mr. Casely Ato Coleman  explained that Plan was in the community to deliver on a promise that was made in July 2016. He said Plan International USA had provided funds under the Gift of Hope Project initiatives to support the project. He stated that Plan’s mandate is to strive for a just world that advances children’s rights and equality for girls. This can be delivered among other things through improved education and participation for children.

He  indicated that this project was a purely community managed project led and delivered by the community in partnership with MEST and MSWGCA. He admonished stakeholders and parents to prioritise girls education and also protect them from gender based violence and hoped the project will become one of the best child friendly learning centers in the country. On his part, the town chief-Pa Foday Kamara lamented that this is not the first time that Plan International was providing for the felt needs of children in their community. In addition to the numerous community engagements, trainings/workshops, he pointed the construction of two primary schools and the town barray as additional projects that Plan has undertaken in the community for the growth and development of children.

He however indicated the lack of a secondary school within the area where children can transition from primary school as one of the main challenges that undermines children’s educational advancement. Sending children especially girls away from their parents to attend secondary school in the cities have led to increased teenage pregnancy and school drop outs for children from the area. He therefore called on the Ministry of education to consider having at least a Junior Secondary School in the area. This will enhance better monitoring of children by parents.

In his statement, a town elder-Mr. Mohamed Fofanah reiterated the importance of the child-friendly learning center which he said was the first in the entire chiefdom. He ended that the community will be opened up to receive more development projects if they are able to do well on this.

The vote of thanks was given by a primary school girl-Fatmata Conteh.

The occasion was climaxed by the cutting of the sod by the Country Director of Plan International Sierra Leone Mr. Casely Ato Coleman together with the Deputy Director of Education-Bombali and the Assistant Director, North at the Ministry of Social Welfare Gender and Children’s Affairs.