Homepages
Your trusted place for Sierra Leone and global news
Trending News
HomeLocalRtd. Maj. Paolo Conteh Raps with the Press on the Spot

Rtd. Maj. Paolo Conteh Raps with the Press on the Spot 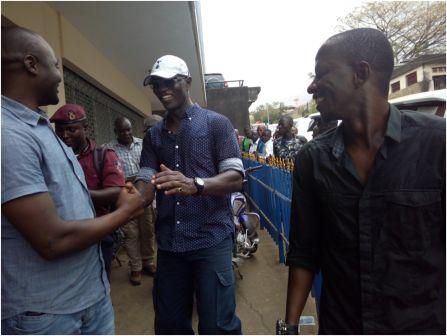 Rtd. Maj. Paolo Conteh Raps with the Press on the Spot

Monday 27th February, 2017, the Minister of Internal Affairs, Rtd. Major Alfred Paolo Conteh was reported to have put motorbike riders in shock when he recently declared another war on commercial motorbike riders.

The Minister was seen on Monday morning with stakeholder departments including Traffic Marshalls, Military, and Police. The check was aimed at tracking down lawless bike riders who flout the ban in central Freetown.

The planned checking of traffic defaulters was conducted on foot patrols along Christ Church Junction by Pademba Road, PWD junction, Campbell Street, Kroo Town Road and Siaka Steven’s Street. He cautioned riders to produce license and life-cards. Those who produced said documentation went on their normal businesses, but those who flouted the law had their bikes arrested and taken to the Ministry of Internal Affairs for safekeeping until they regularised their status, after which the motorbikes were later transferred to the Central Police.

A Senior Government Officer, who produced his license but could not produce his physical life-card had his licence demanded by the operations team. It was only when he showed the soft copy via mobile phone to the authorities led to his bike being released.

In some of his interviews, the minister has reemphasized his promises made before his appointment as Minister of Internal Affairs and his vow to complement government in its efforts to combat lawlessness and other related offences is making gains.

What makes the checking worrisome is the fact that, motorbikes were detained. Those who produced relevant documents were freed. Information sharing was reported to have been exchanged by trapped commercial motor bike riders to their colleagues.

The operation was believed to have sent shock waves to the spines of some unscrupulous bike riders who flout the law with impunity, unaware of the penalty.  One could not deny the fact that even when the ban is in force, some lawless motorbike riders illegally ply the prohibited areas.

A social commentator described the move as the minister’s last straw of the camel’s back to combat lawlessness and indiscipline in the country.