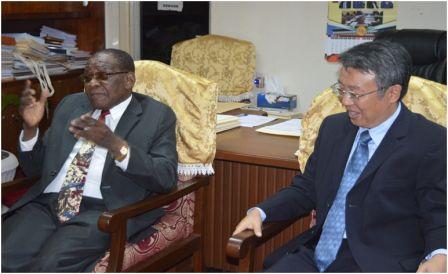 Freetown, 7th March, 2017 – The new Chinese Ambassador to Sierra Leone has called for closer ties between the Parliaments of China and Sierra Leone. In his maiden visit to the Parliament of Sierra Leone at the Speaker’s Suite at Tower Hill, Freetown; Ambassador Wu Peng described Mr. Speaker as a great friend of China, recalling his successful diplomatic tour years ago, while serving as Sierra Leone’s Ambassador to China. He also called for an exchange of visits between the National People’s Congress and Parliament, which he described as very important.  (Photo: Rt. Hon. Speaker S.B.B. Dumbuya and Chinese Ambassador Wu Peng)

In welcoming Ambassador Peng, Mr. Speaker praised his predecessor as one who had cultivated excellent relations with the Parliament as well as diverse areas of Sierra Leonean society, creating a special relationship between the two countries. He was optimistic that Ambassador Peng will do equally well, if not surpass that record. He also shared the prospects of a high-powered parliamentary delegation to China and expressed appreciation for all of their wonderful gestures of assistance to the Parliament of Sierra Leone.

On Ebola, Mr. Speaker rang out a special note of gratitude to the Chinese, who he said were the first to come to the aid of the Government and people of Sierra Leone, prompting others to follow suit. He profusely thanked Ambassador Peng for China’s assistance in combating the scourge.

Before his departure, Ambassador Peng briefed Mr. Speaker on President Koroma’s very successful visit to China, following which, he said, new programmes will ensue. In recent years, Chinese assistance to the Parliament of Sierra Leone has included provision of a new clinic for MPs and staff.