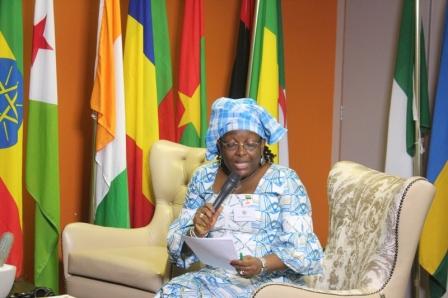 Statement by the Minister of Political and Public Affairs, Hon. Nanette Thomas, during the International Women’s Day in Midrand, South Africa- 8th March 2017.

I’m pleased  to be here with you  all  today to participate on the APRM’s three pronged events; expert, methodology and the APRM commemoration day organized by the APRM Continental Secretariat under the dynamic leadership of the CEO of APRM,  Prof. Eddy Maloka  and  collaborating  partner s of the  African Governance  Architecture  ( AGA) and the African Peace and Security Architecture  (APSA)  of the African  Union ( AU) .

I would want to seize this opportunity wholeheartedly as requested by the organizers to make a statement at this epoch making day  as the first woman to serve as Minister of Political and Public Affairs and APRM’s focal point in my country. International Women’s Day  is a  very significant event in the lives of women in Africa as it recognizes their meaningful contributions to development generally and good governance in particular.

The recognition of women on this day is not accidental as they constitute a huge chunk of the continents population. In my country Sierra Leone for example, they make up 52 percent of the population.  Consequently women are crucial players in the development and governance processes of the continent.

It is in this regard that I would want to add my voice in thanking those in government to involve women in governance and development. Prominent among member states that have made progress in involving women in development and governance efforts are Liberia with a current seating female President in West Africa, Sierra Leone with the track record in the past and currently with a female Chief Justice, a Female Brigadier General and a female State Chief of Protocol.

United Nations Department of Public Information – Africa Renewal magazine August – November  2016 stated that 63.8% is the percentage of parliamentary seats occupied by women in Rwanda as it leads the world in women’s parliamentary representation.

In spite of the numerous challenges facing African states in involving women in governance and development, I would want to urge and encourage member states of the continent to continue to take proactive actions to realize the objectives of women empowerment and their involvement in development.

Let me also thank women all over the world for their resilience and let me hasten to say that it is an inspiration that we will get to the top.

Let me end by thanking and congratulating all women present here in this gathering and I wish you all a happy International Women’s Day.

I thank you all for your attention.