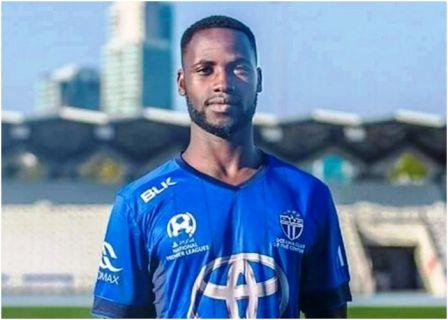 Amadu Koroma on move to play for Leone Stars

Sierra Leonean right full back football star based in Australian, Amadu Koroma has revealed that his dream and ambition is to play for his home country if an invitation is extended to him.

Amadu Koroma who has just suspended his contract with South Melbourne FC, a second tier side competing in the National Premier League has said it will be a privilege representing Sierra Leone.

He added that he suspended his contract to visit his family, establish a tie with other footballer stakeholders and to finally pay courtesy visit on the President of the Sierra Leone Football Association and her executive.

At age 5, Amadu travelled to Australia to live with his father – Ansumana Usman Koroma who is a Policy Analyst in Australia.

In a brief chat with Amadu Koroma, the Sierra Leonean youngster said it will be a great opportunity and honour to play for his country. He noted that he remains unwavered in his determination despite the offer for him to be naturalised. According to him, football is an innate passion and those Sierra Leoneans who have watched him play has described him as an amazing asset to the country.

Although Amadu Koroma is currently the only Sierra Leonean excelling in football in Australia, he said he has still not achieved his dream of playing until the world watch him play for his home country.

He said he has always been away but closely in spirit with his country. He went further to state that he has been in Australia for 14 years and played in Tasmania for two clubs before being scouted in 2011 to come play at a higher level in Melbourne which has made him progressed rapidly.

He reiterated that playing in the National Premier League in a big country like Australia is challenging and highly competitive.

In 32 league appearances for Port Melbourne sharks, Amadu helped Eric Vassiliadis’ side to flee from relegation in 2014 before joining Green Gully ahead of the 2015 National Premier League.

Amadu has been celebrated and highly honoured with a Gold Medal for his fierce and skilful composure to help bring victory to his club. He has played in Tasmania, New town Eagles, Glenorchy Knights, Melbourne Knights, Port Melbourne sharks, Green gully and South Melbourne.