Sierra Leone Tourism Is A Good Place To Visit And Retire 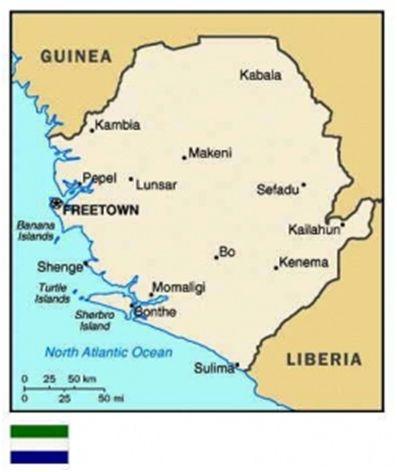 Sierra Leone Tourism Is A Good Place To Visit And Retire

Due to its political tranquility and its safe haven reputation, the British colonialists called Sierra Leone “The Cradle of Africa”. Sierra Leone is truly blessed by our forefathers and it is an amazing country, highly esteemed for her hospitality and a tranquil place for vacationing and retirement.

The climate is excellent with equatorial rain forest. Private clinics and healthcare are inexpensive and of better quality compared to other African countries. Many foreign investors and owners of real estate properties enjoy all the rights of a Sierra Leonean citizenship.

Hotels, motels and housing are still very affordable. The people of Sierra Leone relish and take great pride in their stable democracy for quite a while until in April 29, 1992, when a group of six young soldiers in the Sierra Leonean army, apparently frustrated by the government’s failure to deal with the rebels, launched a military coup which sent the late President Momoh into exile in Guinea.

Today, the cost of living in Sierra Leone is as low as $200 a month and this will give you a comfortable life style. At present more than 100 foreign investors are now in the country and some of them own retirement homes and many more own investment property.

Sierra Leone is a very small country but extremely diverse. It is bordered by Guinea in the northeast, Liberia in the southeast, and the Atlantic Ocean in the southwest. Sierra Leone covers a total area of 71,740 km2 (27,699 sq mi) and has a population estimated at 7,200,000. The country has a tropical climate, equatorial rain forest with a diverse environment ranging from savannah to rainforests.

Freetown is the capital, seat of government, and largest city. Bo is the second largest city. Other major cities in the country with a population over 100,000 are Kenema, Koidu Town and Makeni. The country is home to Fourah Bay College, the oldest university in West Africa, established in 1827, and the third largest natural harbor in the world known as Queen Elizabeth II Quay.

The tourist attraction is our natural harbor. Sierra Leone is 27,000 plus square miles that make up this small country in the West Coast of Africa, it also has approximately 1% of the world’s biodiversity in the ecological communities of our environment.

Sierra Leone’s total population is only less 7.5 million. The capital city has an overlook of the Atlantic Ocean of which natural beauty leaves everyone beguiled. From beautiful white sandy beaches at Lumley, the Sierra Mountains, the Picket Hills and mountain valleys, rolling hills of the countryside to beautiful lakes with towering mountains looming overhead, the natural beauty is unequaled, unsurpassed and unparalleled. The warmth of the beach is with the average highs in the 80s, which climate all retirees bask in all year-round. If retirees or tourists like more of our tropical climate, they can also have a good taste of the “Eternal Spring” at the Lumley Beach.

With the average year round, temperatures are in the low to mid 80s in the daytime and low at 70s at night. Many retirees and foreign visitors sometimes leave their windows open 24 hours a day needing no heat or air-conditioning. The dry season is usually from the end of November until April. The amount of rain in the rainy season depends on the climate zone, with heaviest rains usually in June to August. Rainfalls are tropical rains and are usually anytime, if it is going to rain.

Good news in choosing to retire in Sierra Leone, in its nation’s capital, one can find small, basic homes from $60,000, to $150,000 luxury mansions and estates. One can also live life as extravagantly as you desire. The legislative powers of any government enforce the laws and its constitution to protect private ownership of land and foreign investors enjoy the same rights as citizens. There are almost no restrictions to ownership of private land. You don’t have to be a citizen of Sierra Leone, a Sierra Leonean resident, or even be in the country to own land. In as much as you obey the laws of the land, pay your taxes and willing to invest in the country, and then you don’t have problem with the authorities. As a citizen of this country, you can be somewhere around the world, get someone to represent you to get the land.

Prior to the civil war that lasted ten years (1992-2002) ‘The Cradle of Africa”, Sierra Leone, has a long history of stable, democratic government. There have been no military coups for long a time. Obtaining the status of legal resident in Sierra Leone is easy and advantageous.

The cost of living is relatively inexpensive; you can comfortably live below on $200 a month. In most areas housing costs much less than what it does around the world. Many apartments, condos and houses include a maids living quarters with a bedroom and a small bath. Groceries cost about 65-70% less than what you spend in the Europe and North America. Utilities (telephone service, electricity, and water) are less expensive. There are many restaurants in the central city and the beaches. These restaurants are good at offering many menus from most countries of the around world.

Most foreign investors and retirees opt to come to Sierra Leone, relax, revel the natural sea breeze, the beeches’ white sand and beautiful condos that overlook the Atlantic Ocean and the natural harbor. So, come on down and enjoy the equatorial temperatures. The blessed land that we love, our Sierra Leone!